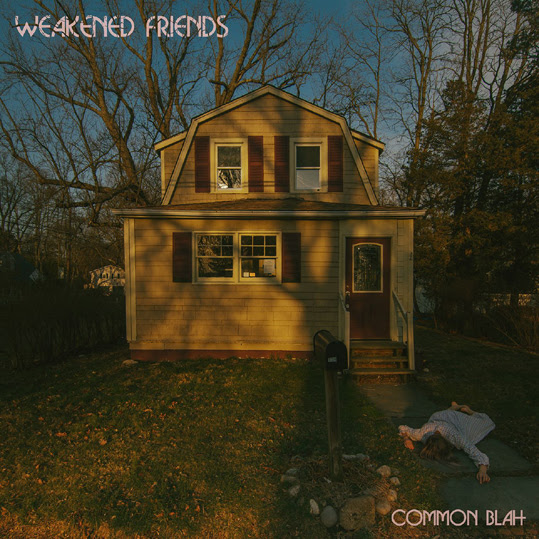 Musical landscapes have been laid to waste by less. It is within this space we meet Weakened Friends, a trio from Portland, Maine, moulding these primary building blocks into their own unique shape. Their debut, Common Blah, is a swarming buzz, soaked in the comforting familiarity of nostalgia, elevated to something far greater than the sum of its parts. It is a record for anyone who has ever sweated too close to the speakers in the front row to feel the bass rattle their chest and seize hold of their heartbeat, who can’t describe in words why they search out the communal comfort of sound, it’s just within them.

Guitarist, singer, and songwriter Sonia Sturino has described her writing as a physical process. That physicality literally pummels you on Common Blah where Sturino wades through the mess that is your mid-twenties, a void where crippling inertia tussles with a burning desire to make something of yourself (“Early”), you clamour to establish and maintain meaningful relationships (“Waste”), and the slightest misstep can send you into spiral of insecurity and anger. No-one ever really prepares you for this, how could they? Allowing her oscillating voice to capture this state of flux Sturino’s vocals never sit still for long. Any perceived imperfections are merely a symptom of the passion with which she delivers them, infused with the fire of someone looking to connect, but fearful the microphone could be switched off at any second.

Weaving a hook laden trail of grunge drawing from the alt rock of early Weezer and the '90s Seattle powerhouses, Weakened Friends are at home in the underground. What sets them apart are the indelible riffs (“Peel”) and pop punk melodies (“Younger”) that will transcend them out of the basement bars, into the ears and hearts of those walking the streets above. Such are Sturino’s guitar heroics that when J Mascis pops up on “Hate Mail” to shred his awe inducing, incisive patterns on the track, it doesn’t feel out of place. Bassist Annie Hoffman exercises a lightly deft touch when it comes to mastering and production, knowing this record has a pulse of its own, to shackle it with intrusive production would be to rob it of its power.

“Good Friend”, with its anthem like swells, is an album closer reminiscent of The Hold Steady had their muse been grunge and not classic rock. Opening with a haphazardly strummed electric guitar, hinting at a quiet ending to proceedings, it soon disappears into an overwhelming fog of distortion. As Sturino delivers the opening line: “I will hang around for good times”, it is enough to transport you to a time when an incredible drum roll, rapid bass line or sing along chorus was all it took to lift you up and over the cliff face you stood before, to see that there was in fact something worth climbing to.

Common Blah, by Sturino’s own admission, was written at a tough time in her life. As the utterly joyous tapped solo of “Good Friend” gives way to that same scrappy guitar and her solitary voice what we are left with is a blueprint for those approaching those same difficult times, a place of solace for those going through them, and a window of reflection for those viewing their twenties in the rear view mirror. Hopefully for Sturino, it is also a full stop before embarking on a new, happier chapter.