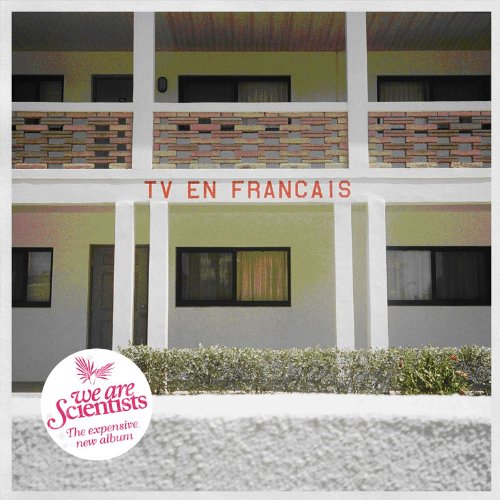 When “Return The Favour” was revealed last year it seemed as though We Are Scientists may have discovered that growing older gracefully was the most positive outcome of all of their experiments.

While a strong sense of humour is obviously key to the band’s dynamic (see their 2009 comedy shorts, “Steve Wants His Money”), “Return The Favour” shows the band in cinemascopic anthem mode. For the most part it’s a song in the key of ‘The Joshua Tree’ (those brooding drums leading echoed guitar parts), while a heavier tone is taken following a bold guitar solo and almost classic rock keys. Was this brave, ballad frontier due to the addition of The Snowman And The Snowdog soundtracker (and ex Razorlight sticksmith) Andy Burrows to the line-up, or perhaps due to the inevitability of age? Either way, it’s not a decision that controls the whole of TV En Francais, but one that provides the more successful moments of the album.

Of course, the tangled line between ageing gracefully, embarrassingly, boringly and successfully is also a fine one. Take Ash’s Tim Wheeler (a long-term friends of the band, who provides backing vocals on “Sprinkles”) as an example. While Ash’s post-punk, nu-rock sound was successful and apt for their first few releases, Twilight Of The Innocents (released during the year Wheeler turned 30) was a less believable effort. Perhaps punk bands (post or pre) have a shorter shelf life than other genres, although while We Are Scientists were initially labelled with the post-variety, their American take on the term is perhaps the reason for their ability to swerve into broader sounds.

As it happens, “Sprinkles” provides one of the more memorable moments, with a familiar bassline snatched from the 80s (“Bette Davis Eyes”, or something along those lines) and a chorus not unlike one of Ash’s suckerpunches. The big-ballads of the 80s can be heard floating around elsewhere, with the simple yet crystallised keys of “Make It Easy”, a driving groove of a bass and harmonies a-plenty making it not unlike Fleetwood Mac’s (who they’ve cited as an influence) “Everywhere”.

So where exactly do W.A.S. refer to the past once too often? As the title suggests, “Dumb Luck” sounds like something that may have slotted in better with a more immature release than album #5, particularly when taking into account the blood-soaked video featuring hands being blended and fingers being sawn. While it’s fun enough – all Spyrograph-like licks and pitch-perfect harmonies – “Overreacting” proves that the band can do upbeat and entertaining without coming across like embarrassing uncle Fred Durst. Sliding between Smiths-riffs and a funked up disco chorus, it gives a bizarre idea of what would happen if even Morrissey jumped on Nile Rogers’ Good Time Express. (Although, with Cliff Richard and Tom Jones as recent Moz support acts, let’s not rule anything out.) “Slow Down” does quite the opposite, but with the band stating that the majority of major label debut With Love And Squalor was written to be performed live, you get the impression that they have this thought in the back of their mind with every release.

‘TV In French’ (thanks Google Translate) isn’t less successful than its predecessors, but the tracks that show a band evolving naturally offer a more welcomed take on the band in 2014. Of the other acts that experienced breakthroughs around a similar time, The Killers went on to worldwide domination by way of reflection a la Springsteen and a futuresque dance take on rock, while Kaiser Chiefs continue to predict the same riot that seems less rebellious by the year. When they dare to offer ballads like “Courage”, and the Beach Boys channelling “Don’t Blow It”, We Are Scientists show that they are an act who don’t want to be taken too seriously, but are musicians who are serious about their career.