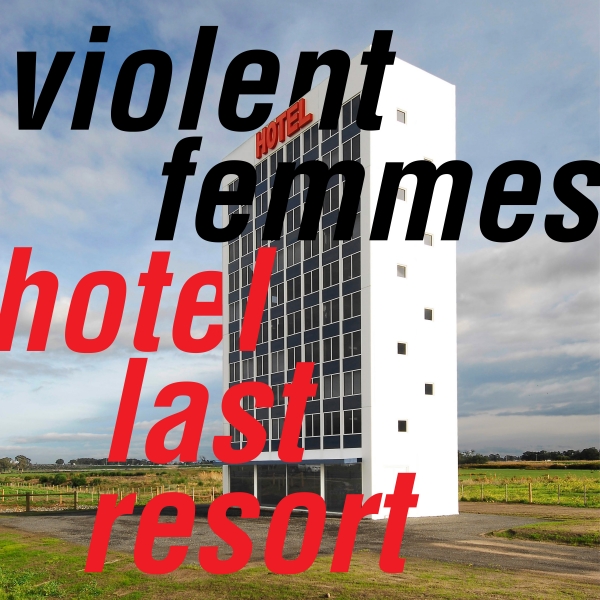 On Hotel Last Resort, Violent Femmes’ tenth album and second since reuniting in 2013, Gordon Gano is in fine spirits.

Hotel, then, functions best both as a tour through their catalogue and as an introduction for newcomers. It features the silly, percussive acoustic numbers they’re best known for (“Another Chorus” and “This Free Ride”); the requisite faith-based song (“Adam Was A Man”); the let’s-see-what-happens experiment (the band’s take on Pyx Lax’s “I’m Not Gonna Cry”); and Gano’s snide slackerisms throughout (“A chortle is still not a real laugh” and “Have mercy on me / I’ve got girl trouble up the ass”).

The record offers a couple neat surprises, too. Television guitarist and frontman Tom Verlaine shows up on the title track with some typically smart and tight lead work. Meanwhile, pro skateboarder Stefan Janoski provides backing vocals to the centrist apathy of “I’m Nothing,” a full-band, ska-adjacent remake of their 1994 concert favorite. And then there’s VF’s truly unique take on “God Bless America” (which may or may not be sarcastic) that ends the record on the kind of strange note that only they could produce.

But on the whole, Hotel Last Resort is nothing special in the band’s career, and doesn’t feel like it, either. It’s simply another solid effort from a group that has yet to put out a bad one. If you have any passing knowledge of what Violent Femmes do, you pretty much know if you’re gonna like this or not before even hearing it. Aside from Hallowed Ground, the band’s never really colored too far outside the lines established on their 1983 debut. Fittingly enough, “Hotel Last Resort” opens with the line, “I don’t change the chords anymore / The chords change themselves.” Yeah, that sounds about right.