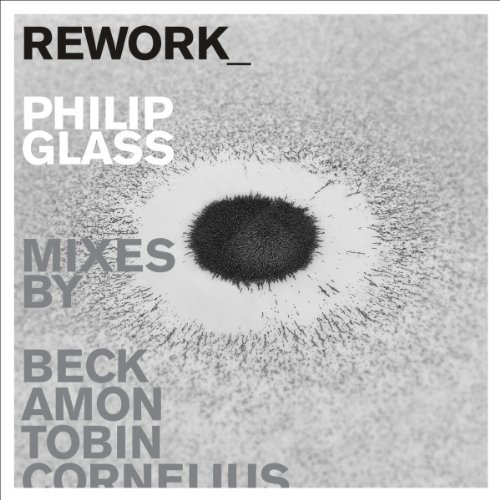 When you reach a certain level of influence people expect you to give out presents on your birthday rather than receive them. Philip Glass hit the big seven-five back in January and since then the minimalist composer has already celebrated the milestone with a birthday gig at Carnegie Hall, his own five-day music festival, and a revival tour of his avant-opera Einstein on the Beach. But birthdays are about looking to the future as well as patting yourself on the, and this is where Rework: Philip Glass Remixed comes in. A collaboration with Beck and producer Hector Castillo featuring leftfield electronic music luminaries such as Dan Deacon, Memory Tapes and Pantha Du Prince, Rework is the kind of record intended to show off Glass’s influence on contemporary pop music, and where that influence might go in the next seventy-five years.

In fustier hands a project like this would look crass, but more than any of minimalist contemporaries (and really, how many could you name?), Glass has accrued the kind of cultural capital normally reserved for globe-trotting pop stars and rock bands. A great deal of that fame and influence is down to his readiness to move out of the conservatory and engage in traditionally pop forms without a touch of snootiness and with a lot of egalitarian good faith. Interviewed by the New York Times recently, Glass outlined his no-brow philosophy: “I didn’t think of as a higher of lower art form… When I hear young composers, it’s not even clear to me whether they were conservatory-trained or they were trained in bars or restaurants or pop-music venues of the big cities. It’s irrelevant”. Namedropping Philip Glass as an influence isn’t a route to obscure cool, but just says you’ve maybe seen The Truman Show or had parents who bought the Koyaanisqatsi soundtrack to impress the neighbours.

Despite that wide appeal, there’s still a singular quality to Glass’s music that makes a remix album not the most obvious project. Sure, the man himself is eager for his stuff to be played around with and defiled – “I’m the opposite of being possessive about a piece” (and on the same note, the project is set to include a remixer app that allows users to butcher tracks from the album) – but casual modesty is easy when you’re the man himself. At its most Glassian, his music sounds like cruising through a flawless landscape towards a flat horizon: signs whizz by at regular intervals, the engine ticks over at a steady canter. In the kindest possible sense, music has never sounded more like calculus with all the workings out long erased. For the prospective remixer upsetting the balance might feel like drawing a moustache on the Mona Lisa, or –sticking to the mathematical analogy – tapping “58008″ into a calculator, turning it upside down and smirking while Archimedes works towards a better approximation of pi at the front of class.

Consequently, a fair share of Rework’s remixes are reverent adaptations rather than radical reconstructions. My Great Ghost’s take on the opening suite of Music in Twelve Parts layers on bass hits, jittering hand claps and spiralling 8-bit lines of melody but the change is mostly ornament, leaving the original’s melodic counterpoint well alone. Similarly, Nosaj Things’ attempt at ‘Knee1’ only obscures the opera piece’s mechanistic counting in a shifting sea fog and cocooning vocal coo, while Cornelius offers a pretty straight-up cover of Glass’s opening to Glassworks.

More successful are the covers that use the repetitive strains of Glass’s music – those repeated sections of road – as readymade remix stems to be re-arranged in the artist’s own accent. Glass’s original ‘Rubric’ features woodwind and brass sections throwing the same percolating signal back and forth before combining to raise the song upwards into a calculated bliss; on Rework, Ty Braxton’s reimagining turns the saxophone blasts into a rubbery squeak, the flute mathematics into shattering icicles; rather than ascending the song trundles along, threatening to collapse under its own weight at any moment. It’s a smart wink that uses all of original piece’s own parts against itself to create a playful foil to Glass’s own mannered precision. Likewise, ‘Warda’s Whorehouse Inside Out Version’ has Amon Tobin managing to make Glass sound threatening and corporeal: a half-measure of string repeats throughout, cutting like a saw through the murk of the track, while a double-bass gets blown up until all you can notice is the sound of the callused fingers smacking against the strings.

And then there’s ‘NYC:73-78’. Earlier this year Beck won plaudits for his cover of ‘I Only Have Eyes For You’. Almost a re-enactment, it was a cover that went about heightening the reality of the original by building in its own decrepitude: sounding like the Flamingoes’ original bent out of shape by the ravages of time, or how a record just put on after sitting in someone’s loft for half a decade might sound. ‘NYC: 73-78’ doesn’t pull exactly the same trick – it sounds fresh, vivid, sometimes terrifyingly so – but it still works around a similar kind of psychogeography of how we might remember music rather than how we hear it. This time Beck crafts a feverish night terror that stitches together snatches of his own compositions with a wide breadth of Glass’s work until you – and, Beck too, you imagine – can’t tell the difference between the two. If all the tracks on Rework are love letters to Glass’s, Beck’s is written in blood or newspaper cut outs.

Glass is one of those figures who’s probably your favourite band’s favourite influence’s favourite influence. It easy to forget, but the Soho that Glass made his name in was at the same run-down part of Manhattan that hosted The Velvet Underground and Andy Warhol. Like Glass, Lou Reed was something of a disciple of drone music pioneer La Monte Young, and while the ill-treated viola on The Velvet Underground & Nico is a good deal more well-known than Glass’s Music with Changing Parts, their experiments with Young’s blueprint exist in the same universe. In London 1971 both Brian Eno and David Bowie attended the same Philip Glass Ensemble performance of that drone piece , and a few years later Bowie’s Berlin era saw that same pair abandoning traditional pop structures for a pulse-heavy sound with its own debts to minimalism.

Considerable influence and hackneyed ubiquity can often sound the same on the surface. And tied to that, there’s an unfair perception around Glass’s work: that once you’ve heard one of his pieces you heard them all – they’re just arpeggios after all. Rework is as mixed a bag as remix albums of this sort tend to be, and is unlikely to change the minds of listeners for whom the schlocky imitations of Koyaanisqatsi – Adam Curtis documentaries, Madonna’s ‘Ray of Light’ video, endless sped-up stock footage of corpuscular trials of traffic glimmering red and white, and big moons behind plate-glass skyscrapers – come to mind when Glass’s name is mentioned. Nor is it an authoritative starting point; a bold reintroduction of the composer to a new generation. What Rework is, though is a good enough grab-bag of curios that demonstrate a lasting fascination with Glass’s work.