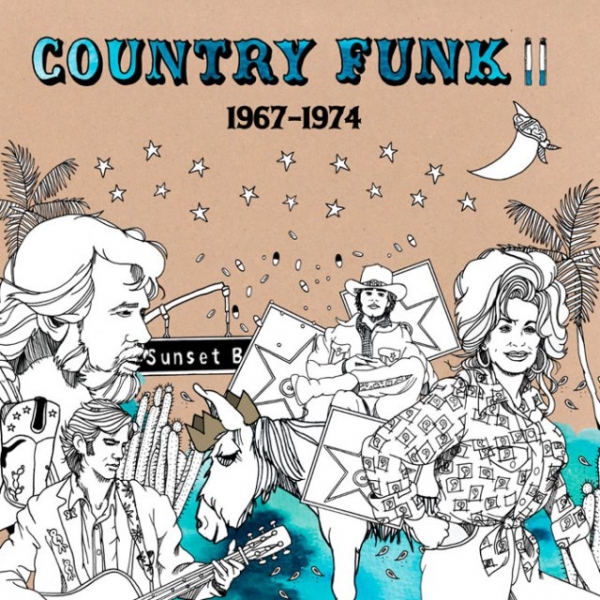 What do - to pick two stars of Country Funk 2 at more or less random - Willie Nelson and Bobby Darin have in common?

On surface, very little. The Nashville reject turned successful author of bluer-than-Blues-itself ballads (“Crazy”, “Night Life” et al.) and the popular crooner behind such evergreens as “Mack The Knife” and “Dream Lover” were normally poles apart artistically. At a certain point in the 70’s, however, both were found sporting Stetsons, dishing out plenty of questionable attitude and straddling the type of fat and funky grooves that would be equally at home amidst the cowpats of the country and the whisky-stained temptations that go with the bright lights of the big city. Most likely, they were blissfully unaware that a colleague had just been pitching their tent on very similar musical terrain.

That’s how the sound that we’ve recently started to refer to as “Country Funk” emerged and evolved in the late-60’s and early-70’s. A group of disparate folks - country superstars (Dolly Parton, Kenny Rogers), artistically frustrated session musicians (Donnie Fritts), obscure should-have-beens (Jim Ford), cult heroes (Townes Van Zandt), established artists searching for a new direction (The Byrds’ Gene Clark, as part of Dillard & Clark) - figured out that the wailing pedal steels and beer-splattered flips from regret to bragging that kept those honky tonks pumping could not only coexist but also benefit from a dose of inner city grit injected by punchy horn riffs and beefed-up beats. Add anti-authority vibes that were well-aligned with the era’s prevailing mood of ‘the man’-baiting amidst country music’s customary tales of heartbreak, happiness, homesteads and hellraising, and you have a fairly neat summary of what’s happening on these 17 expertly selected tracks.

It’s easy to assume that the likes of Darin (whose harmonica-wailing “Me and Mr. Hohner”, a tale of hippie harassment played for uneasy laughs, is one of the highlights here) were cynically trying to revive their flagging careers by hopping on a bandwagon. With the exception of Willie Nelson, who finally found solo stardom with the ‘outlaw’ stylings exemplified by the superb “Shotgun Willie”, however, this stuff wasn’t exactly setting the cash registers alight. It took a few decades and groundbreaking retrospective efforts such as the first Country Funk comp for people to realise that there had been a scene or a sound happening in the music capitals of the US (and, in the case of Ian and Sylvia Tyson’s Great Speckled Bird, Canada) at all.

Incorporating gospel (Dolly Parton’s aptly titled “Getting Happy”), straight-up country harmonies (Dillard & Clark’s beautiful take on The Beatles’ “Don’t Let Me Down”), period trappings (Larry Williams and Johnny Watson’s hippiefied, raga-influenced “Nobody”) and Cajun fiddles (Willis Alan Ramsey’s “Northeast Texas Women”), Country Funk 2 accepts a widened definition of what belongs within its remit. We never quite reach the mind-blowing heights of the first instalment’s greatest discoveries, namely Larry Jon Wilson’s “Ohoopee River Bottomland’ and Jim Ford’s ‘I’m Gonna Make Her Love Me’, although Donnie Fritts” does-what-it-says-on-the-tin “Sumpin Funky Going On” comes very close, but the quality remains very high. For evidence, check out (just a name a few) Billy Swan’s slowed-down, tenderised take on the Elvis classic “Don’t Be Cruel”, Hoyt Axton’s preposterously macho “California Women” or Thomas Jefferson Kaye’s hypnotic, positively spooky “Collection Box” (on this evidence, Kaye and Fritts’ long-lost solo albums should be reissued without further delay): tracks that don’t have that much in common on paper but sound driven by the same ethos and ideas. Obviously, any compilation that includes the laidback longing of JJ Cale’s spooky “Cajun Moon” (“Bringing It Back” would have been an even more apt inclusion) is worth its asking price.