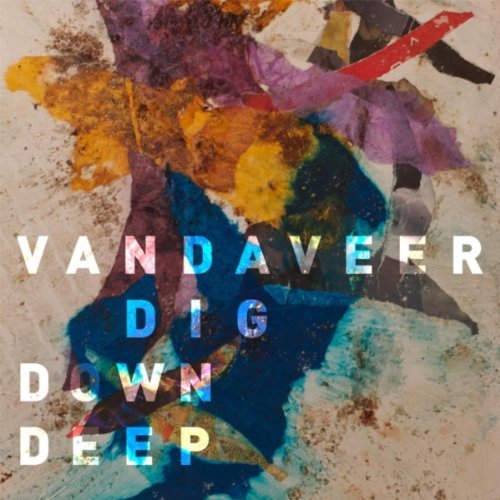 As the title to Vandaveer‘s third album suggests, frontman Mark Charles Heidinger gets even more personal with his songwriting on these forthright batch of new tunes, while also clearly identifying with his countrified Kentucky roots. Dig Down Deep is a delicate collection of artfully crafted Americana that pulses with an honesty and elegance that ultimately makes these songs memorable while also sounding distinctly timeworn and familiar, even upon first listen. Rose Guerin’s lovely vocal harmonies augment each number with a deeper tenderness and added intimacy, as the duo’s weathered voices blend seamlessly over the sparse, wispy arrangements.

The hymn-like title track opens the record splendidly, as the muted strum of Heidinger’s acoustic guitar eventually gives way to an uplifting piano strain and muted drums that elevate the song to its rousing chorus.  It’s a striking start that surely will catch any listener’s attention,  but the band switch gears a bit on the rootsy ‘Concerning Past &  Future Conquests’ (as they do consistently throughout the record), which has a poppier melody and echoes Damien Rice a bit both in the vocal delivery and raw emotion conveyed by Heidinger and Guerin. There is an old-world sound to each of these numbers, which is a testament to the subtle beauty of Heidinger’s songwriting, but also to the subtle,  understated production that never piles on more sonic layers than these refined songs can handle.

‘Beat, Beat, My Heart’ is the longest track on the record, and even though it comes near the start, it forms the sturdy centerpiece of the album. The restrained guitar work featured throughout the track gives the song a real front-porch singalong feel,  as if we have gathered around the duo as they sing to a reassuring roomful of friends. It’s a moving, genuine track that works because of its discerning nature, never trying for anything more grand or overreaching for fear of sounding false. The emotions conveyed by these stirring songs always come across cleanly and bristle with an authenticity that only adds to the lingering sentiment the listener is left with after spending time with the record.

‘The Great Gray’  injects a palatable sadness to the middle portion of the album, which continues with the mournful, bluesy piano of ‘As A Matter Of Fact,’  which colours the song with a disconsolate passion that is easy to identify with. But they snap out of their doldrums on the boisterous ‘The Nature Of Our Kind,’ a spirited, emphatic number that is one of the clear standouts of Dig Down Deep, and surely will get fans singing along on the rousing chorus. And rather than sticking out awkwardly after the string of downtempo numbers, the track fits seamlessly within the confines of the emotional spectrum set by these songs, and the record flows impeccably from start to finish.

After the driving urgency of ‘Spite’ and ‘Pick Up The Pace,’ the album concludes with the impassioned solemnity of ‘AOK’ and ‘The Walking Hour.’ The latter track comes across as a bit of a tragic lullaby that, despite its somber undertones and harrowing lyrics, at least provides a welcome bit of serenity for both the singer and listener alike after the tender,  revealing sentiments expressed throughout the recording. It’s a strong finish to an album that touches a clear nerve, featuring songs that make you feel but also make you move at the right moments. And it’s ultimately quite refreshing to hear something this honest and heartfelt coming out of Washington, DC. Let’s just hope that some of the leaders are listening.