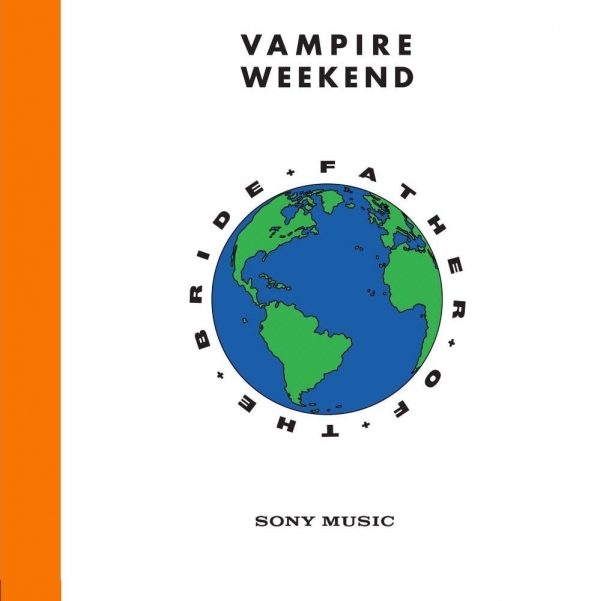 “Nobody knows what the future holds/And it’s bad enough just getting old” sang 29-year-old Ezra Koenig on “Diane Young”, a microcosm of the existential dread of Vampire Weekend’s third album Modern Vampires of the City – a defining document of late-millennial ennui. On Father of the Bride, Vampire Weekend’s first album in six years, Koenig is becoming at ease with the present – like a loosening of muscles after years of holding them tense.

This shift parallels Koenig’s personal circumstances: he is a new father, and has spent much of recent years living in Los Angeles with his partner, the actor Rashida Jones – far away from Vampire Weekend’s native New York. The album also marks a change in personnel: it is the first release made after the departure of founding member Rostam Batmanglij, the group’s multi-instrumentalist and primary producer. Batmanglij still contributes production to some tracks, but the close-knit songwriting team at the group’s core is effectively no more. Although Father of the Bride features contributions from a huge number of starry guests – including Danielle Haim, BloodPop, and The Internet’s Steve Lacy – it feels much like a Koenig solo release; both in its in its indulgences, and in its reflection of a newfound easy maturity.

Vampire Weekend’s initial trilogy of records was firmly rooted in the seasons of the east coast: the new-September-term crispness of 2008’s self-titled debut; the sun-warmed carefree springtime of 2010’s Contra; and the anxious, wintry interiority of Modern Vampires of the City. Father of the Bride is situated within an endless Californian summer, evident in its (at least surface-level) lightness: rolling pianos, country-inflected phrasing, and languid Grateful Dead riffs. The album trades in simple metaphors, and it’s easy to characterise it as a whole by making one: aligning its flattening of the seasons with Koenig’s own transition to a constant, settled state.

Doubts and worries are now played out in the reassurance of the sun. “I know that pain is as natural as the rain / I just didn’t think it rained in California,” Koenig sings amongst the bright guitar licks of “This Life”, a chronicle of threats to a superficially perfect relationship, and the work it takes to piece it back together. The song is typical of Koenig’s gift for storytelling, but marks a switch from the observational, detail-rich mini-symphonies of Modern Vampires to a simpler take on relationship dramas. The most interesting mark of this pivot to domesticity comes on “Stranger”, where the normative expectations of home life are presented as unusual for this previously anxiety-wracked millennial: “I left the wild days of old / Your house is warmer… Things have never been stranger/Things are gonna stay strange”.

Koenig has said that he was inspired to write much of the record after listening to Kacey Musgraves, and this arguably superficial engagement with country music shows. The album’s three duets with HAIM’s Danielle Haim are a perfect distillation of this new approach. For better or worse, these responses to the grand tradition of country duets form the core of the album. Opening track “Hold You Now” is a charming and funny back-and-forth between a sometime couple, lamenting their circumstances but taking solace in fleeting moments of connection (“I can’t carry you forever/But I can hold you now”). The song is soaring and beautiful, leaning on an inspired choral sample from Hans Zimmer’s Thin Red Line soundtrack, and offering a different filter for VW’s characteristic taste for the bittersweet. The remaining two duets, “Married in a Goldrush” and “We Belong Together” are anticlimactic in comparison: catchy but bland pastiche, like songs written for a period musical. “We Belong Together” represents the worst example of the album’s broader lyrical strokes in its extended list of pairs: “We go together like Keats and Yeats / Bowls and plates”. Vampire Weekend’s embrace of the unfashionable has always been part of their charm, but this nursery-rhyme tweeness inspires the wrong kind of second-hand embarrassment.

Father of the Bride suffers the pitfalls of its double album length, and 5 or 6 tracks feel like filler; but its highs are tall and shining. Lead single “Harmony Hall” is a assured standout, and a summation of another one of the album’s preoccupations: how newly-found personal happiness is supposed to coexist with worldly threat. The lyric alludes to a snowballing echo chamber of anger, and parasitic forces at work in political institutions (“Wicked snakes inside a place you thought was dignified”). The callback to Modern Vampires’ “Finger Back” is a realignment of sadness – what once was existential and wracked with regret is now an acknowledgement of the decline of the world and how uneasily that sits with personal comfort. “I don’t want to live like this/But I don’t want to die” sings Koenig, immediately followed by a rolling “Sweet Home Alabama” piano riff: ease existing alongside distress, or perhaps overriding it.

This more traditional American songwriting style is confronted with contemporary production flourishes, creating a satisfying tension throughout. It’s clear that a great effort has been made to create something that sounds this effortless. The record approximates looseness, but in actuality is very tightly wound; plastic and synthetic, like a technological reconstruction of humanity. It’s exposed in sporadic cracks in the songs: the decaying vocal sample in “Hold You Now”; the brief, harsh electronic scramble in the middle of urgent, ancient-sounding “Sympathy”; the vocoder amongst the crunchy guitars of eclectic miniature “Bambina”. The album is purposefully over-groomed, its happiness and calm hard-fought — or is it barely holding itself together?

If Modern Vampires of the City was about feeling young and old at once, never quite fully occupying either state, then Father of the Bride is about feeling exactly one’s age. Like much of Vampire Weekend’s largely millennial audience, Koenig is in his mid-30s. What is the impact on the listener when, having grown alongside an artist for three albums, seeing their own existential dread reflected, they are suddenly outstepped on the fourth? The thirties are an anxious decade, in which traditional, normative milestones and achievements are seemingly achieved by another friend or former partner every few months, prompting panic and reassessment of one’s own relative success each time. Witnessing this outstripping in musical form – Koenig’s apparent comfort in adulthood, the security and confidence in his newer lyrics – evokes this Facebook-notification angst on a grander scale, a musicalised alienation that prompts stark re-evaluation. It’s unfair to deny even our most beloved artists this progression and growth – they don’t owe us anything – but it’s difficult to be faced with a work that suggests they have grown past the confused state that we still feel rooted to.

On Modern Vampires’ “Don’t Lie”, a rhetorical question hung like a spectre: “Does it bother you? / The low click of the ticking clock”. With Father of the Bride, Koenig has made his peace with the life and death ahead of him – a natural progression for a successful musician over a decade into his career. Perhaps feeling left behind by a favourite artist who previously fell in with your every step is part of the pain of growing older – getting a glimpse into their temperate present, but still stuck treading water in a tumultuous present-future state.