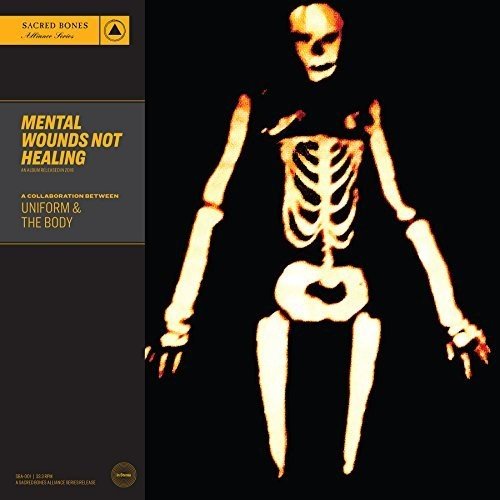 It’s safe to say that The Body never sleep. The Portland-based duo continually release more and more material and this time around, they’ve teamed with New York powerhouse duo, Uniform. Unlike the Body’s last joint album, Ascending A Mountain of Heavy Light, with Full Of Hell, Mental Wounds Not Healing allows both bands to respectively pull from one another with their striking similarities and mesh their efforts with one striking, cohesive work.

Both The Body and Uniform are bands who continue to master the ability of unleashing a specific kind of fury with their music. If you’ve been lucky enough to see either band live, their energy and stage presence is riveting, corrupt and downright horrifying. That liveliness is ever-present on Mental Wounds and even though it may be easy to pinpoint what a joint release would sound like from the two, both offer enough twists and further secure the idea that both bands are confidently turning the genre of metal on its head and leaving it for dead.

Mental Wounds has what you’d expect: the piercing and pulsating electronics, the themes of grief and misery – but despite its predictability, it remains a remarkable listen. Both The Body and Uniform work exceptionally well as a supergroup and it feels like an equal, fluid contribution. Both bands are pulling from the right areas and as a result of that, Mental Wounds exceeds expectations. Vocals factor in largely to the album’s success. Chip King’s vocals are used timbrally, as an instrument, as they have been for quite some time with any Body-related release. Although utterly menacing, his repetitive style can be off-putting if they dominate any given track. What strengthens Mental Wounds is the choice to let King’s vocals intermittently come in and out of focus while Michael Berdan’s remain relatively upfront. “The Boy With Death in His Eyes” is a prime example of this – a track that chugs along and it isn’t until past the halfway mark until King comes in. Although brief, King’s sparse vocals pack more of a punch if given this way.

The album’s first single, “Come And See” is a slow burning killer. Berdan’s throaty vocals lead the track and you help but snarl your lip in malice and want to clench your fists. “In My Skin” shows both bands venturing into different territory – the addition of clean, bright guitar strums. It’s nothing too radical but shows both bands at their dreamiest and most reserved, offering the idea of what else they possibly have in store. In the album’s brief 27 minutes, The Body and Uniform offer a spectacle. Mental Wounds is a spectacular display of two bands continuing to push expectations and who’re willing to be the flagbearers for revision.