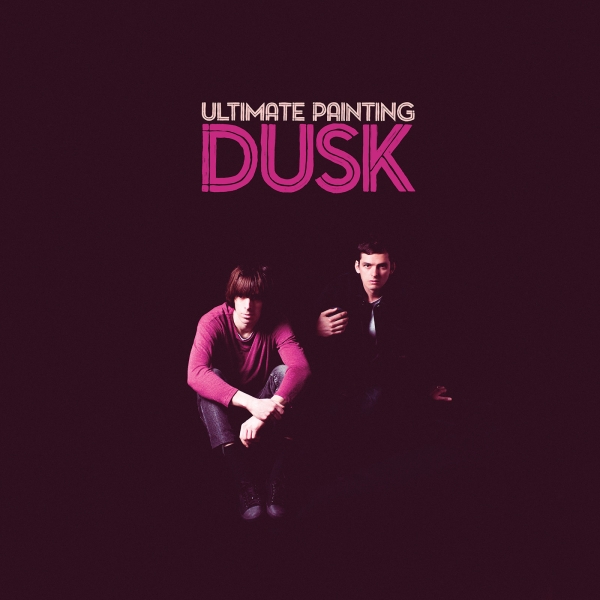 A new album from Ultimate Painting is now more or less officially a fall tradition, and Dusk’s aura is appropriately autumnal.

James Hoare and Jack Cooper must be finishing each other’s sentences by this point. Whether they’re reflecting on wayward friends and noisy neighbors, or it’s city parks and rough commutes that are giving them the blues, their simpatico wavelengths are such that the pair never needs to raise their voices or blood pressure too much.  The songs on their self-titled debut and follow-up Green Lanes kept calm and compartmentalized, facing down obstacles with loosely laced guitar interplay and close vocal melodies.

Still, if anything can disrupt domestic bliss, it’s mounting debt. Dusk opens on dark living room: the camera pans down to Hoare and Cooper crouched on the carpet, “Peering out between the blinds / Peering out between the fines”, as the collector looms on the porch. “Bills” rolls along the paisley Motorik path that Ultimate Painting sometimes veer in to, coming perilously close to breaking a sweat. What measure of chill was at risk is soon recovered with “Song for Brian Jones”, where a line like “It’s all in my mind / Paranoia and the fires burning wild” is delivered with a level of drama inversely proportionate to that of its content. “Skippool Creek” drifts like a reclining version of Luna’s “23 Minutes in Brussels”. Shifting down a gear from the previous two albums opens up as much as it limits.

Ultimate Painting don’t come across as the kind of songwriting unit that will ever deliver excessive arrangements, but Dusk does introduce new atmospheric elements. “Lead the Way” and “Monday Morning, Somewhere Central” are dappled with Wurlitzer piano. New drummer Melissa Rigby has a keen sense of when to toss in the occasional tricky fill to keep the rhythm from getting too metronomic. Minor refinements are enough for a group so fully formed from the start, and Dusk is Ultimate Painting’s fullest record yet.