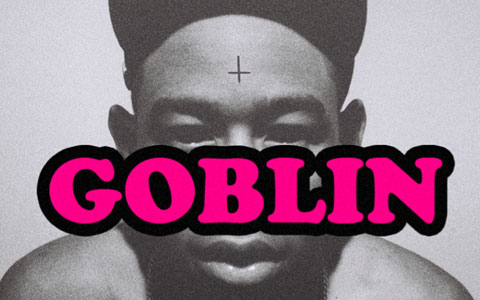 In late December of 2009, Tyler the Creator released his self-produced album, Bastard, on the tumblr of his rap collective, Odd Future Wolf Gang Kill Them All. It was a disturbing, amateurish and fully-realized vision of teenage nihilism in the unusual package of a rap album. Tyler and Odd Future exist in a unique cultural place, one that feels particular to Los Angeles, as black skater kids obsessed equally with hip-hop and punk rock shock tactics. The combination of those two elements is electric. Tyler’s work stands as a repudiation to the rich man, stuffed shirt raps of Jay-Z and Rick Ross that have dominated popular hip-hop for years. Instead of rapping about his (non-existent) wealth, Tyler raps about the pains of being an awkward, father-less teenager and his violent, often misogynistic fantasies. Those fantasies, despite their often goofy energy, have made Tyler seem dangerous and sexy whilst also making him a lightning rod for criticism. His new album, Goblin continues in the same vein of unhinged, often funny and deeply personal material that is Odd Future’s hallmark but painted a shade darker. If it isn’t a better introduction to Tyler than Bastard, it’s the album that will bring Tyler’s sensibility to a much wider audience.

Goblin is clearly positioned as a sequel to Bastard, from the repeated framing device of the school counselor/therapist that’s used throughout to album opener ‘Goblin’ which echoes Bastard’s opening track as a sort of “state-of-Tyler” rant over a skeletal backing track. While Tyler feels like he has stagnated a bit lyrically, Goblin stands head and shoulders above Bastard musically. The new album, with only a few uneven moments, has a much richer and satisfying sound than its predecessor as Tyler’s production (with some help from Left-Brain) has evolved from the spare sounds of Bastard without losing any of that album’s evocative, funhouse unease. The drums are loud even on the more sedate songs like ‘Nightmares’ and they often punctuate eerie, minor key synths. On ‘She,’ a ‘Thank Me Later’ style synth line set slightly askew and a smoothly sung Frank Ocean chorus are married queasily to the lyrics, which veer from the album’s most romantic to creepily obsessive (“Blinds wide open so we can see you in the dark when you’re sleeping”). There are moments of sonic diversity like the Lex Luger/Flockaveli-aping ‘Bitch Suck Dick,’ the vaguely Aphex Twin-like instrumental track ‘Au79’ or the blown-out and brittle sounding ‘Radicals’ (the only truly bad song here); but as a whole, the album sounds of one piece and the repetition of theme helps it all hang together nicely, even if it means there aren’t a ton of tracks that jump out at you on first listen.

Tyler isn’t the best technical rapper in Odd Future – that would be Hodgy Beats or the mysteriously absent Earl Sweatshirt – but he has the most fully realized personality and that makes him the group’s most interesting voice. Tyler is disillusioned and nihilistic in the way only a teenager can be; listening to him you sense that he feels grievously disappointed that the nice things promised by society haven’t been available to him. On standout single ‘Sandwitches,’ an awesome combination of stuttering drums, descending synth lines and Wolf Gang chants that come together to sound like fight music, Tyler raps, “Come on kids, fuck that class and hit that bong/Let’s buy guns and kill those kids with dads and moms/with nice homes, 401ks and nice-ass lawns.” They’re funny lines but also deeply angry. That anger leads to a lot of imagined violence, which is best at its goofiest, like on the hurried, dubstep rush of vampire-fantasy ‘Transylvania’ where Tyler raps, “All beige suit made out of white women/with the red lipstick dancing to John Lennon.”

Part of the Odd Future zeitgeist has been an uneasiness, particularly from the indie scene, with exactly these type of fantasies. But instead of backing off the shock-factor, Tyler has doubled-down. Goblin is considerably more rape and obscenity obsessed than Bastard. That isn’t to say that Tyler doesn’t seem sensitive to the criticism; he spends a considerable amount of space complaining about people not “getting” Odd Future and refuting their complaints (often only to go right back to the well; see ‘Goblin’s’ “I’m not homophobic… faggot” line). At times he can make it funny, like on ‘Goblin’ when he goes after the conservative, backpacker guardians of the hip-hop underground who seem to have missed out on every interesting thing to happen in hip-hop since 1997, but a lot of the time the detours feel boring. If you don’t give a fuck, then don’t give a fuck. Tyler, like Drake, another rapper to be made famous before his debut album via Internet hype, professes to be turned off by his new-found fame and the way it’s changed his life. There’s a self-awareness to everything Tyler does but but his self-pity feels false and unrelatable especially when its contrasted with his usual wonderfully demented exuberance.

Goblin is unmistakably the work of a teenager and Tyler, like Eminem before him, isn’t the kind of artist you can take piecemeal. Even if the profanity is offensive, it’s the flipside of everything that makes Tyler exciting: his goofy, cartoonish approach is so affecting because it’s the product of very real teenage anger. Goblin is the sound of a truly unique voice in music, one that is unapologetically dark and disturbed; the fact that it has become a true pop culture phenomenon makes it only that much more fascinating.