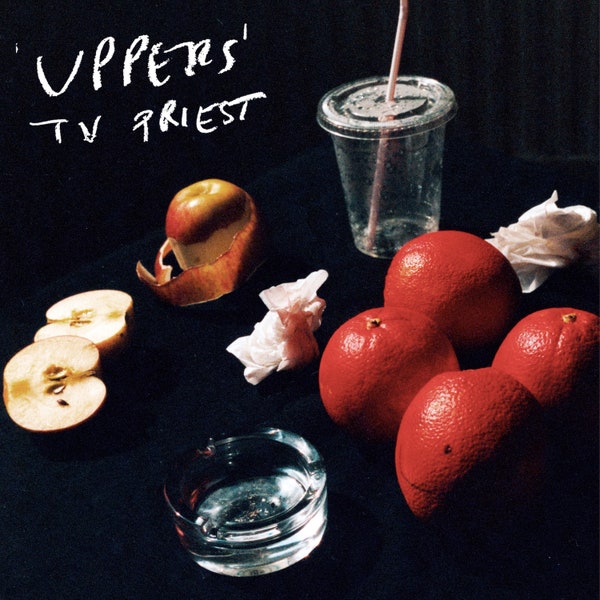 Introducing your band in the middle of a global pandemic can almost seem like a ridiculous move, but that’s just what TV Priest did last year. Fast forward to now and the band have been picked up by the legendary Sub-Pop label, created massive fanfare, released brilliantly ironic music videos and have now dropped debut album Uppers.

Uppers starts as it means to go on with a riff that Pulled Apart By Horses would’ve been proud of in their prime. The album's gritty guitar-led overture then joins forces with lyrics that’ve seemingly been pulled straight from a motivational poster outside of your local baptist church: “This could be / the first day / of the rest of your life”. And so begins Charlie Drinkwater’s genius. Taking phrases that are there for aesthetically pleasing Instagram captions and leading them to drink alongside screeching industrial guitars and thunder-bastard drums.

"Press Gang" turns up to the Uppers party more laid back than its predecessor. It’s got its sunglasses on indoors, wanting you to stick on Lou Reed that’ll set the mood for a vintage jive, but not before initiating a plan that will involve headbanging repetition. “It's got legs / and it walks / and it walks” shouts Drinkwater as the song does a blink-and-you’ll-miss-it left turn into a room shaking Hives-esque garage-rock bonanza. This three-minute pinhole camera of a track looks into the way we consume media in a concise nature, in that it gives an insight into the almost comical nature of how the press operates and how a story that has legs will be consumed through shock factor, before anybody even fact checks.

The album then motors forward as "Leg Room" does its best Drenge circa 2015 impression of gushing grunge in the midst of a relatable societal ticklist. Listing off an almost apocalyptic cynical inventory that is not limited to a decaying hollywood film premiere, holographic singers, commuters, philosophers and most notably, James Corden’s CarPool Karaoke. "Journal of a Plague Year" does it’s best to remind us of the shitshow that was 2020 on a societal and human level. It introduces us to the new normal that we’ve all unfortunately become accustomed to and offers out help that is closer to an advertisement placed in George Orwell’s 1984 and not the self-help you’d need from a Jeff Olsen output. The track also doubles up as a small respite from the gritty thudding that we’ve been used to so far.

That is until "Decoration" enters the play. Uppers’ pinnacle arrives just in time, slap bang in the middle and dissects irony to aplomb and how everything means something and absolutely nothing at the same time. “It’s all just d-d-d-d-d-d-d-d-decoration” bellows Drinkwater that concisely sums up how meaningless things are without context to the subject from which it stems from. By taking aim at Britains Got Talent (“I’ve never seen a dog do what that dog does / and I’m through to the next round”), aesthetically pleasing instagram backgrounds (“my feature wall is outstanding / my craft credentials / as good as new / as good as old / as good as fake..”) and the meaningless validation of it all, showcases the true TV Priest and how they sit on the fence with a leg perfectly placed either side of sardonic and serious and look purposely placed up there, but without the obvious condescension that pours out of post-punk peers' IDLES

The only issue for this record is that thereafter it meanders far too much and those lyrics that you loved at the beginning you begin resenting at the end as it almost becomes a caricature of itself. Where they were once perfectly sardonic, they soon become obvious, and similarly, where the music starts brutal, it ends up having less and less effect on you as it goes along; almost as if you’re desensitised to the point. That doesn’t stop it being something great to chew on. Uppers is a great place to start and should rubber stamp TV Priest as one of, if not your favorite new act.