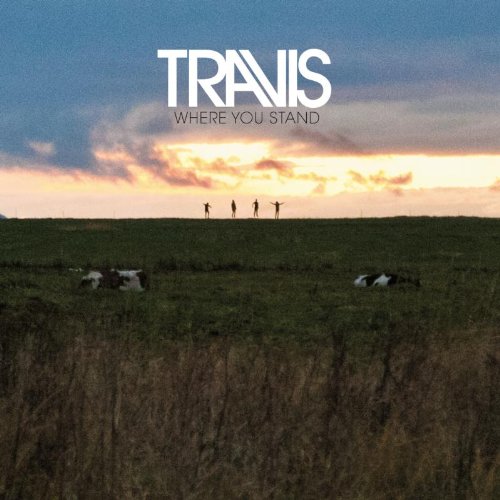 Five full years have come and gone since the last studio album from Travis, a number that serves as a litmus test for the band’s career in more ways than one. As a testament to their underrated, enduring pop legacy, the band’s new record Where You Stand is their seventh, and lends a longevity few contemporaries can claim. On the other hand, it’s not as if the masses have exactly clamoured for more since 2008’s Ode To J. Smith.

The middling response to Travis’ most recent output is a product of their knack for pretty pop songs. Where You Stand fits squarely into their discography, a blend of intimate ballads and anthemic mid-tempo pop that shows Fran Healy and company have still got it. It’s just that if you never got into “it” in the first place, Where You Stand won’t change your mind.

For Travis fans, however, Where You Stand is a fine effort. ‘A Different Room’ bursts with colour like a spring bouquet, with harmonies perfectly placed around Healy’s vocal. It’s an ideal pop construct in the model of ‘Closer’ or ‘Sing’, proving Travis haven’t lost their strong melodic sensibilities. ‘Warning Sign’ is another highlight, with a memorable mid-tempo groove and deftly executed sing-along vibe – seemingly deliberately planned as a late summer release, Travis have included a generous stack of seasonally appropriate tunes to spin.

Yet there’s a lack of dynamism that haunts Where You Stand. ‘Mother’ wants to succeed as an energetic piano pop opener, but it ends up landing like an Aqualung outtake. By the time the single ‘Moving’ and the uninspired ‘Reminder’ float through, any hold the album once held is lost in the latter’s attempt to give radio another whistle-along, four-on-the-floor pop song. Likewise, ‘New Shoes’ tries to change up the feel with a bouncing groove and electric interlude, but somehow just plods annoyingly along.

For the most part, Where You Stand is made up of eleven pleasant songs that will more than satisfy long time fans. When asked about their time away, bassist Dougie Payne recently remarked, “You stay away as long as it takes, so you feel that hunger and desire to get back to it same as you did at the start.” While the band likely needed an internal reset, the reality is that their music has never strayed far from the sweet, straightforward compositions they’ve been creating all along. Where You Stand picks up where you last left them – no matter where that was along the way.