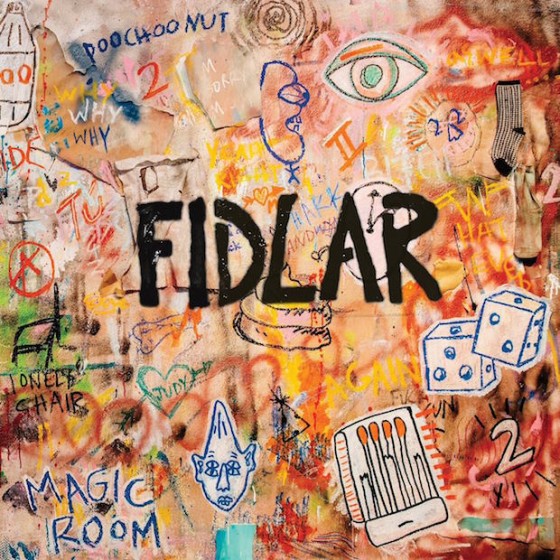 First things first; in order to put this record, and the band in general, into some pretty stark context, this recent profile of FIDLAR from Consequence of Sound is an important read. On their first album, 2013’s self-titled effort, they set out a mission statement that was decidedly devoid of nuance or complex design; skateboarding, booze and a general sense of boredom and disenchantment prevailed, although not necessarily with any serious suggestion that this was a band in any way interested in tackling the big issues head-on. FIDLAR was great fun, but it never seemed as if it was supposed to represent more than that.

Fast forward a couple of years, though, and suddenly we have frontman Zac Carper delving into the bleak truths behind his past drug addictions. He’d alluded to having used hard substances before, but in the Consequence piece, he spells out harrowing details - less than two months after the release of FIDLAR, for instance, his then-girlfriend - pregnant at the time - overdosed on heroin, killing her and Carper’s unborn child. He had introduced her to drugs; the subsequent guilt sent him into an alcoholic tailspin. FIDLAR stands for ‘Fuck It, Dog, Life’s a Risk’. We now have irrefutable evidence that this happy-go-lucky approach is, at least in part, a front; this isn’t Wavves-style posturing.

It’s intriguing to consider just how much having this kind of information to hand can colour your judgement of a record, because sonically, Too is by no stretch of the imagination a radical departure from its predecessor; in places, you can tell that certain rough edges have been sanded down in order to put melody first and out-and-out unbridled energy second (the melodic romp that is “West Coast” is a great example) but otherwise, many of the tracks here follow the same, riotous skate-punk template as their debut album counterparts. It’s just that now, you might view them a little differently; opener “40oz. on Repeat” might previously have indicated nothing other than youthful hedonism - “I’m gonna lock myself inside my room / with this 40oz. on repeat” - but in the light of recent disclosures, it paints an altogether more dispiriting picture.

Musically, there’s flashes of progression from last time - the near-spoken word strut of the verses on “Sober” is one such example, with the slow-burning “Stupid Decisions” playing like FIDLAR’s own take on a power ballad; the subject matter is evidently autobiogrpahical for Carper, too - “we didn’t talk enough, and we took too many drugs / we drank too much, yeah, we messed up.” The blunt force of the lyrics matches the unrefined, uncomplicated nature of the general FIDLAR sound, although you might argue that Too feels a touch lopsided in terms of its distribution; tonally speaking, much of the heavier material is kept for the second half of the album, including the off-kilter, and understandably tortured, “Overdose” - a claustrophobic, near-acoustic cut - and bombastic closer “Bad Habits”, which masks equal parts sadness and resignation with a daft, overblown progression to the chorus.

There’s a level of vitality and excitement that pretty much comes as standard with FIDLAR, and as brainless punk fun goes, they’re tricky to top; that said, the combination of Too’s natural inclination for rambunctiousness and its often tragic subject matter make, at times, for a jarring listen. It’ll be fascinating to see where the Californians go from here; for now, we have Too, a muddled record that thrills and distresses, equally, in short bursts.