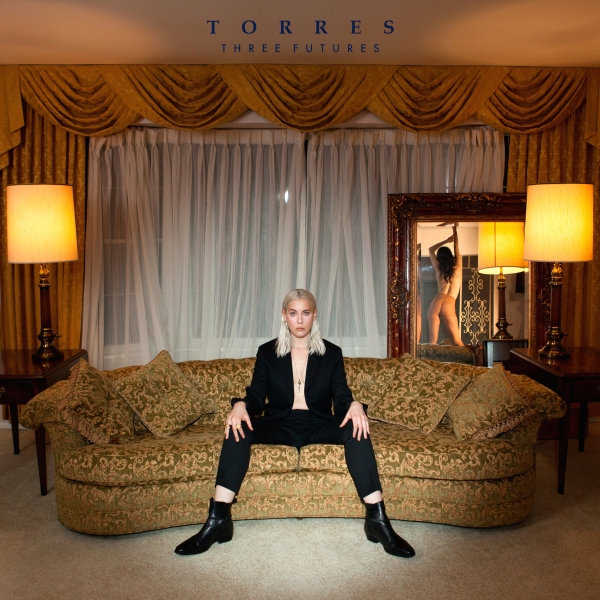 Through her first two albums, Mackenzie Scott – AKA Torres – wrestled with reconciling the staid religious cornerstones of her Southern upbringing with her desires, ambitions, and interactions with the world away from home in her early 20s. Scott’s 2013 self-titled Torres debut dealt with the genesis of this exploration in a fairly introspective tone while 2015’s Sprinter burst this swelling conflict into rejection and anger-laden growls and squalls.

Scott’s latest, Three Futures, finds her settling into a sagacious understanding and acceptance of the pieces of her own life before and up until now and the nuance that glues them together. Backing off of Sprinter’s furious immediacy, Three Futures is an album swathed in texture and rumination which makes it an album that requires – and rewards – repeated listens. However, they are also signs that Scott is comfortable laying everything out and having us approach and patiently root through it.

Much of Three Futures is bathed in a dark, shades-drawn production, rumbling along on a heavy, pulsating low end, punctuated by a variety of electro-glitches and guitar accents. The album’s sonic homogeneity lends it an air of sameness at first blush, but the details burrow their way out on subsequent listens; the guitar work, in particular, offers fleeting doses of delightfully understated melodicism to counterpoint the slow industrial grind beneath.

The title track offers a tidy summation of her reckoning with the tug of choice versus fate – a truth that has underpinned Scott’s emotional journey since her debut and one she has resigned herself to here on Three Futures. In letting down what appears to be a romantic partner, Scott intimates that she’s seen “three futures – one alone, one with you, one with the love I knew I’d choose”. Scott describing this vision of three possible paths forward as “a trinity” is one of the few religious references found on Three Futures, marking a departure from her previous albums and a further indication that she’s inched closer to that reconciliation of her past and present.

Thinking that Scott has attained some sort of psychological nirvana, though, is a wayward presumption. The artist who has continuously sought to feel comfort in her own skin still wrestles with identity as she ruefully confesses on album opener “Tongue Slap Your Brains Out” to her family, “I know you never dreamed I’d become a damn Yankee / I need you to believe that I’m still your same baby” in an attestation of reassurance as much to herself as to them that who she was is unchanged with who she has become.

On the flip side, Scott’s growing comfort with herself and the notion that exploring life is not a one way ticket to Hell has led to an epiphany of celebrating her body and sexuality. Scott affirms that she’s “not a righteous woman / I’m more of an ass man” on “Righteous Woman”. She goes on to flaunt the song’s tangential religious reference by subverting a well-known Bible verse into a declaration of “just know that I am dealing with a flesh that’s far too willing”.

As Scott greets the morning lying in bed seemingly between two of her three futures on the simmering closer, “To Be Given a Body”, she “laughs until [she] can’t breathe” with the realization that being afforded the opportunity to have these paths, for better or for worse, is cause for celebration and appreciation. As she states in the titular chorus, “to be given a body is the greatest gift”; it’s a nod to the generosity of the Creator as well as the realization that it’s our duties to use the body as a means to feel and to experience.

The dichotomies that Mackenzie Scott surveys – comfort vs. discomfort with self, choice vs. fate, prudence vs. hedonism – all rely on their pains in appreciating their pleasures. On Three Futures, Scott has cracked the shell of rage and resistance encasing her prior outings, emerging wiser and more mature in accepting, and even welcoming, that bad that comes with the good but, most importantly, she’s done festering and prepared to move forward.