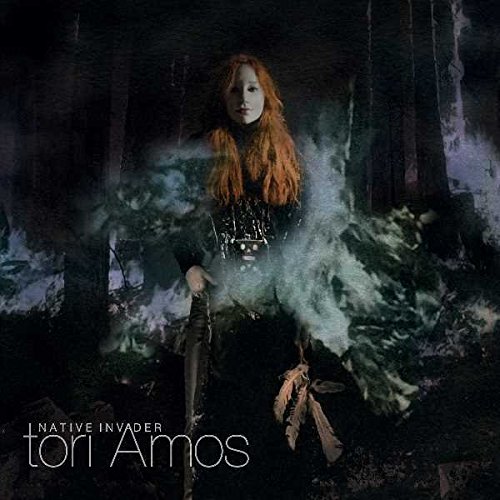 “Is it too late to make myself a safe place?” sings Tori Amos towards the start of Native Invader – a desperate, lonely thought from a woman caught in a maelstrom of political and ecological ruin. How do we find shelter in a world like this? How do we nurture hope? Is finding solace in the self a sign of resilience, or a step towards dangerous individualism?

Amos set Native Invader – her 15th studio album – in motion in the summer of 2016, when she set off on a road trip through the Smoky Mountains of North Carolina, in search of the stories and songlines of her mother’s family, who originated from the area. Then, shortly after returning, two seismic events forced the record off course; the unraveling struggles highlighted and amplified by the US election, followed by a shock closer to home – in January this year, Amos’ mother suffered a severe stroke, leaving her unable to speak. It was clear that Amos needed to adapt her approach.

It's a mark of her stature as a songwriter that the narrative of the record doesn't feel interrupted or disjointed. She returned to the original source material with a new perspective: Still concerned with ancient places, but also siting herself amidst the overwhelming horror of contemporary life, finding consolation in nature’s resilience against disaster. In the album’s frequent allusions to climate change, there is also a hyperawareness that even the earth’s hardiest flora and fauna are on the brink of careless extinction, a concern made even more urgent after last year’s election. On “Broken Arrow”, she sings of “poisoned rivers”, but also imagines how we can look to the natural world for spiritual inspiration: “Ancient songlines are singing to wake Lady Liberty / She may seem weak, we may be too weary / Still those songlines sing”.

Even when dealing with colossal subject matter, Amos tends to ground her material in the experiences of specific women, whether contemporary, historical, or fictional. This has been true throughout her career: From the early episodic tales of Anastasias, Jackies, and Mariannes, to the epic one-woman journey of 2002’s Scarlett's Walk, and the titular Strange Little Girls of her 2001 covers album, reimagining songs written by men from a female perspective. Our natural reaction to cataclysmic events is to cling to those closest to us, so it’s fitting that the women who populate Native Invader are Amos’ closest family: album closer Mary’s Eyes lays bare Amos’ struggles with the effects of her mother Maryellen’s stroke, and her subsequent inability to speak. “What’s behind Mary’s eyes?” Amos repeats, aching for communication. It’s the most vulnerable moment on the album, but even seconds from the finish she is picking herself back up again, forcing herself to put on a brave face: “Hide your tears / Can’t we just bring her delight?” she begs of a family member.

On “Up the Creek,” the song most directly focused on the subject of climate change, Amos exchanges lines with daughter Natashya Hawley with a tightness and resolve fitting of the subject. Hawley's voice is only slightly distinguishable from her mother's, and her appearance in itself is poignant – she will certainly feel the consequences of global warming more than her elders.

The broadest kind of political music (read: rock music made by white people) has always tended towards clunky platitudes, and unfortunately Native Invader is guilty of this on a couple of occasions. On “Bang”, there are bordering-on-hippy-dippy references to how “we are all made of stars,” and to cartoonish “warlords of hate,” temporarily jolting the listener out of the narrative of the album. It’s only momentarily disconcerting, though, as it comes in the midst of what is one of the album’s strongest and most genuinely sinister tracks: a science-fiction nightmare which casts Amos as a kind of Dr Frankenstein, biologically modifying humans (or maybe just herself?) to be more resilient for the horrors that lie ahead. She lists off fantasy chemical compounds – “Hydogen, calcium, phosphorus, potassium, sodium” – with increasing urgency over a crescendo of guitar and piano. “All I want to be is the very best machine I can be,” she repeats, as a kind of caveat: The measures that desperate people will go to rack up consequences like bad debt. There’s another, more disturbing reading, of course: It’s not difficult to see how talk of biological superiority and “molecular machines” is prescient in this particular political moment.

Like the best of Amos’ work over the past 20 years, what makes Native Invader exceptional is its complexity: songs are laid out like puzzles, ready for the subjectivity of the listener, with no obvious interpretations. It’s an attitude that is simultaneously generous and challenging, mirroring the difficulties of navigating the contemporary world. The tools for solace and resilience are here, but there’s no obvious way of reaching them.