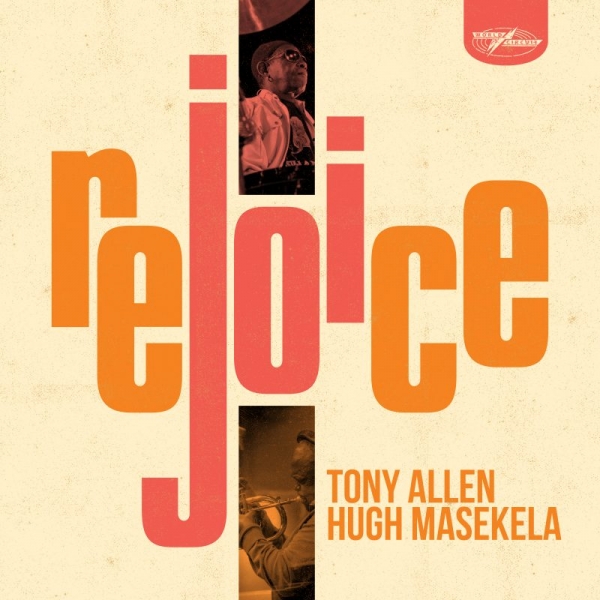 Rejoice doesn’t have the most straightforward of origins. Started in London in 2010 when the touring schedules for Tony Allen and Hugh Masekela aligned, the album was eventually finished almost a decade later by Allen and renowned World Circuit producer Nick Gold following Masekela’s passing in 2018.

Despite its extended gestation, Rejoice doesn't sound disjointed in the least. Widely recognised as the founder of South African jazz, Masekela was drawn to the Lagos-based orbit of Afrobeat dynamo Fela Kuti, where Allen played a crucial role as the polyrhythmic engine of the Nigerian legend's Africa 70 ensemble. As such, the percussionist and trumpeter first got to know each other in the early '70s.

Backed by a group of key players from the contemporary London jazz scene, Rejoice sounds like the work of veterans who have known each other for an eternity. Loose-limbed, laidback and effortlessly cool, the album is infused with unhurried, organic joy of playing and an abiding, infectious sense that the musicians involved are in this primarily to please themselves. There's no showing off or one-upmanship involved here.

The eight tracks on offer follow a shared pattern. As a foundation, Allen cooks up an unpredictably evolving, multi-layered groove that somehow (as is Allen's trademark) sounds incredibly funky and minimalist whilst actually being a fiendishly complex undertaking. Before too long, Masekela emits a bright motif on top of the beat, which continues to proceed unstoppably with the logic of a casually galloping moose. Guest musicians from outfits such as Acoustic Ladyland, Ezra Collective and KOKOROKO are present to varying degrees of prominence but never hog the spotlight: this is very much the Allen and Masekela show, two genuine legends of African music cooking up a charming, easy-going blend of cool jazz and Afrobeat vibrancy.

The ease of Rejoice turns out to be the album's one shortfall. While it seems unduly harsh to find fault in such a joyous, vibrantly flowing record, the tracks do eventually seem a bit too similar, even interchangeable at times. That said, the positives easily outweigh such reservations when it comes to this South African-Nigerian polyrhythmic jazz cook-up. "Tony Allen...Hugh Masekela... Check it out," Allen half whispers on the closing “We’ve Landed”. It’s well worth heeding his advice.