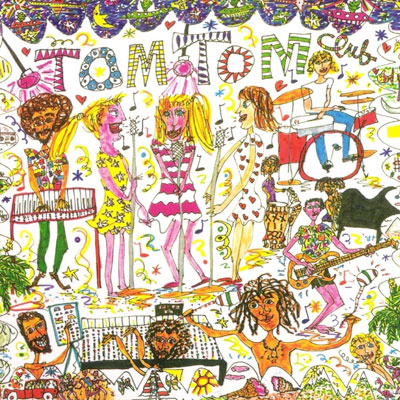 The first rule of Tom Tom Club is: you do not talk about Tom Tom Club. Or so it would seem, given the surprising regularity with which the talent and influence of Tina Weymouth and Chris Frantz’s funky new wave outfit is overlooked whenever a music magazine or website decides to wax lyrical about the groups which formed in the post punk era. If they’re mentioned at all, it tends to be as a footnote, a little asterisk at the bottom of a homage to the Talking Heads, for whom Frantz drummed and Weymouth played bass. That footnote may pay tribute to ‘Genius of Love’, their most successful song, a bouncy, bubbly and beautiful staple of the cooler indie discos. But there’s more to the band than that. Their first album, in particular, is a wonderful piece of music, a sprightly, eminently danceable record with some great hooks and no shortage of ideas; the records that followed are inferior but still interesting. Their magpie-ish appropriation of rhythms and sounds from genres such as afrobeat and reggae ensures that all of their songs sound familiar and strange at the same time: familiar, because they’re borrowing grooves which have had a profound impact on western music for the last few decades, and strange, because those grooves are being married to a distinctive form of American guitar music, new wave. It also ensures that, even at their worst, they’re great fun.

This live album, which is inevitably titled Genius of Live and features a performance originally documented on Live at The Clubhouse, contains a good deal of the group’s less well known material, including five songs which originally appeared their most recent studio album, The Good the Bad and the Funky. This means that a number of well-loved tracks from their debut, including ‘Under The Boardwalk’ and ‘On, On, On, On…’ are absent. Whether you consider this a problem will depend on your expectations of the record. Genius of Live is not a collection of the group’s best-known moments, and it should not be viewed as a ‘Greatest Hits’ record which happens to have been recorded live. It should, however, appeal to long-time devotees who already own all their records, and casual fans who want an introduction to material not featured on their self-titled record.

One might expect that playing perky pop music for a full thirty years would inevitably cause a group to exude a certain degree of ennui, but the band sound confident and lively. They are happy to play around with their songs, extended and twisting them into new shapes. ‘Genius of Love’ now features a surprisingly congruous dancehall vocal, and ends with an intentionally loose jam which presumably succeeded in keeping the audience’s feet moving. Their take on ‘Wordy Rappinghood’ is contrastingly subtle. Its superficially silly lyrics sound interestingly pointed when underpinned by subtle, ominously chiming guitar, as they initially are here; the cries of ‘what are words worth?’ and ‘you don’t stop’ suddenly sound almost despairing. The record’s other highlights are sultry, smooth renditions of the relatively obscure single ‘The Man With The 4-Way Hips’ and the classic ‘As Above So Below’. After the latter finishes, the album tails off a little, finishing with some perfunctory run-throughs of inferior material like ‘Happiness Can’t Buy Money’ and ‘Holy Water’.

Especially enthusiastic fans may enjoy a second disc featuring close to a dozen different remixes of ‘Genius of Love’; most people will rightly conclude that you can have too much of a good thing, and that listening to eleven subtly different reworkings of the same song, regardless of that song’s quality, is more of a chore than a pleasure. Nevertheless, this record is worth buying for the live performance; aside from the occasional patchy moment, it represents a decent overview of some of an under-appreciated band’s less well known music.