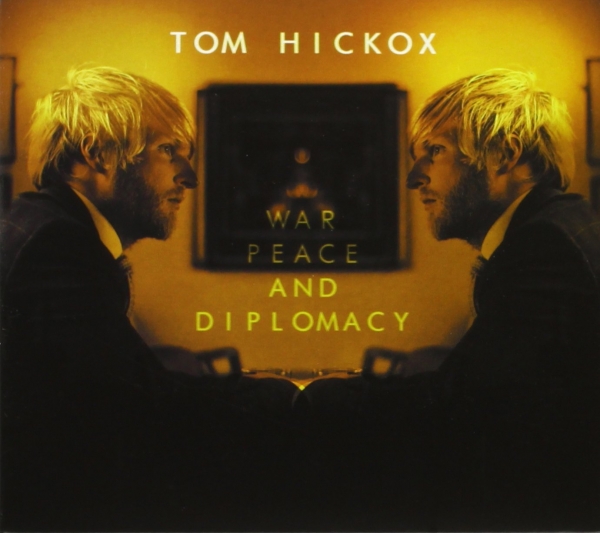 Tom Hickox is a young British fellow who dresses as suavely as he sings, but with long-time coming debut album War, Peace and Diplomacy, there’s going to need to be some substance beneath that polished veneer to leave a lasting impression.

Hickox’s vocals are rightfully paramount, a velvety cross between Wild Beasts’ Hayden Thorpe and Patrick Wolf on valium. His lyrics have clearly been pored and obsessed over; they tell stories and make you implicit in their role-play, as in “Pretty Bride of Russia” where despite his glossy baritone Hickox transports you into the mind of a naive young woman, or in “The Lisbon Maru” wherein he evokes a washed up, discredited old sailor, whose salty attire you can almost breathe in. Each song is transportive and though for some they’ll come across as more painfully earnest, they certainly attempt to chart novel territory and remain unbound by cheesy commercialism, easy rhymes or any self-aware sense of cool.

These stories are usually underpinned by folk and country inspired arrangements and instrumentation, pedal-steel guitars, and his own considerable skills as a pianist. Over forty minutes these nine tracks lull you into Hickox’s sparse worlds and personas, a richly textured and unhurried journey. It makes for a necessarily dedicated listen which is therefore difficult to dip casually into, and it certainly doesn’t pander to a short attention span or hook you with big choruses or riffs.

So is your attention held? The consistent pace and melancholy tone makes it difficult to pinpoint a particular standout, although “White Roses Red” is particularly emphatic, a raspy ballad with the twang and drone of a sitar lending it an exotic flavour and the aforementioned “The Lisbon Maru” tells a great story in the vein of a melodramatic sea-shanty. There are moments which Tom Hickox stretches a little too thin, relying too much on his vocal timbre, and there’s a danger of the album’s middle third becoming tedious unless you’re fully invested in the narrative. It’s a shame because there’s real originality here, but with all the weight on one man’s shoulders it often becomes muddled.

Still, to its credit War, Peace and Diplomacy is a record out of time and Tom Hickox is a peculiar but real talent. Ambitious, meticulous and imaginative, though a little inconsistent in quality and drawn out, it’s a record that like most stories will become an old, comforting friend to some, whilst others will skip a few pages and write it off as a disposable pleasure. Regardless, Hickox has crafted a real milieu and one feels he has plenty more stories to tell.