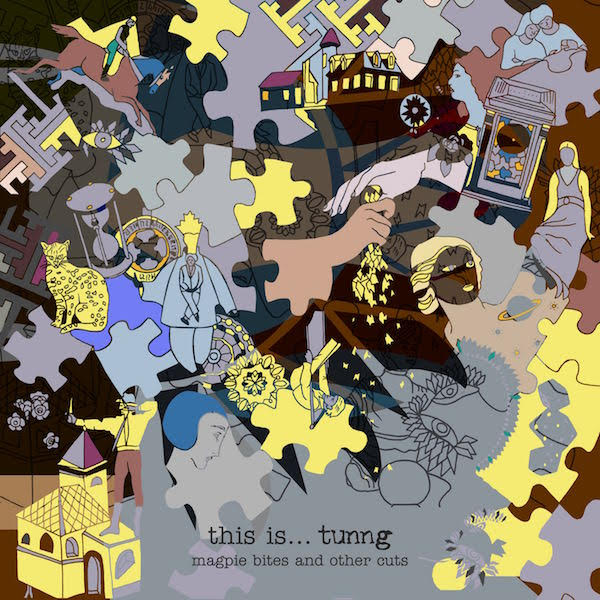 Over the course of 20 charming oddities and offcuts (eleven tracks plus a bonus disc containing nine more), Magpie Bites and Other Cuts reminds us of Tunng’s almost unrivalled ability to conjure fantastical, joyful worlds.

From rich textures and stories of everyday life springs a wealth of playful realms inhabited by bubbling synths, soft harmonies and the gentle kind of instrumental tinkering that made them synonymous with the folktronica of the early 2000s.

Formed in 2003 around the musical partnership of Sam Genders and Mike Lindsay - augmented over the years by band mates Ashley Bates, Phil Winter, Becky Jacobs, Martin Smith and Simon Glenister - Tunng’s 15-year career spans six studio albums that cover everything from prog to psych, from pop to folk.

The fact that the 11 tracks that make up the album proper jump around chronologically but still somehow make complete sense is a testament to the wondrous unique universe Tunng have created for themselves. It’s not that everything sounds the same, far from it, but that there is a strong thread that ties each moment together.

Album opener “Heatwave”, written in 2018 while working on their latest collection of new material, is a gleeful slice of earnest indie pop that so easily slides into Bloc Party cover “Pioneers” before the racing momentum slows down perfectly for 2006’s “Bodies” – a live staple that fans will also recognise from the bonus track of Comment of The Inner Chorus.

Taking a wonkier slant is “Pool Beneath The Pond” – the B-side to the first ever Tunng release on 7” Take From Black, released on Static Caravan Recordings way back in 2004. Here the burgeoning energy of a new band finding their voice can be heard in experimental electronic blips, distorted banjo, double bass, vocoder and beer can solos.

Meanwhile “Death and The Maiden Retold”, from 2006 compilation Imagined Village, recalls work by contemporaries like David Thomas Broughton, who was experimenting with warped acoustics and folk traditions around the same time. Soon we’re back in 2018 and enjoying the absurdist humour, warped electronic sensations and playful surrealism of “Bank Holiday.”

Things continue to get weirder with “Clump”, whose pace and mood dances all over the place in the best kind of way before the Gruff Rhys-like oddball closer “Peanuts” wraps up the main affair so distinctly.

To have nine bonus tracks attached to a B-sides and rarities collection is a bold move, and a touch on the self-indulgent side for sure, but buried here you will find further treasures in “The Source” and “Wood”, as well as a sense of the community spirit that has formed the backbone of this band since its inception.

It is so easy to level criticisms at collections like these, snidely remarking that B-sides were B-sides for a reason or questioning financial motives behind dredging up such offcuts, but This Is Tunng… Magpie Bites and Other Cuts is different. This is not a dredging, this is an excited excavation – one that makes old tracks new and proves Tunng’s creativity knows no bounds.