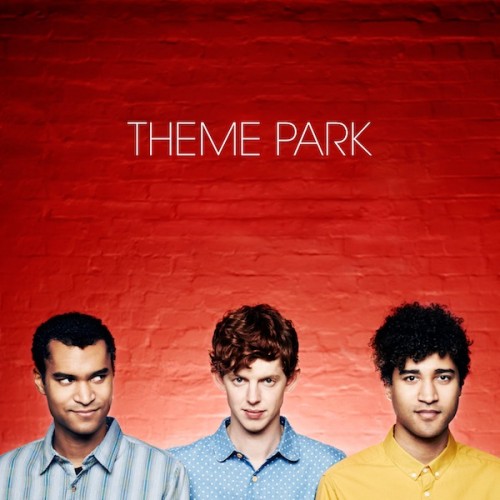 This record seems to have been a long time coming for Theme Park. Since mid-2011, they’ve been releasing singles here and there and certainly haven’t been shy of the live circuit, but they didn’t seem in any rush to put together an album to tour behind, apparently waiting until they felt ready to release a full-length.

It’s an admirable approach: present-day pressure to remain as prominent as possible so often seems to force bands into putting out hastily-compiled efforts that frequently turn out to be horribly half-baked – and the obvious question on Theme Park’s first spin is whether or not the band’s patience has proven a virtue.

First things first – this is a gorgeous-sounding record, beautifully produced. Opener ‘Big Dream’ sets the tone in this respect; the drums crackle as an irresistible bass groove weaves in and out of a barely-there guitar riff; one of a number of tracks on the album that uses the guitar for colour and punctuation, rather than allowing it to drive the song, with mostly effective results. You certainly couldn’t accuse Theme Park of turning out an unrefined debut; the lush production is every inch the sound of a band who enjoy taking their time about things.

You might, however, argue that a February release serves as evidence that perhaps they haven’t been quite patient enough; this is an album made for summer. There’s obvious modern influence here; ‘Ghosts’ takes its funky guitar cues straight from the sunnier side of Foals (think ‘Miami’ or ‘My Number’), while the soaring harmonies on ‘Jamaica’ recall Wild Nothing’s ‘Summer Holiday’. You’d be hard pushed to find a great deal of originality in Theme Park’s calypso-heavy approach to indie pop, with ‘Wax’ and ‘Two Hours’, both previously-released singles that have made the cut here, heavily indebted to different sides of the sound that Friendly Fires have spent the past few years perfecting; the former a chirpy pop stomper, the latter a more pensive, groove-based effort that wouldn’t sound out of place next to ‘Strobe’ or ‘Ex-Lover’ on Fires’ debut record.

That’s not to say there aren’t attempts at experimentation on the album; ‘Saccades (Lines We Delay)’ uses peculiarly distorted vocals over minimalist guitar backing, and ‘Still Life’ sees frontman Miles Haughton aim for a deeper vocal delivery, which is then married, in the unlikeliest of fashions, with erratic, high-pitched synth.

It isn’t difficult to avoid taking Theme Park too seriously – the balmy, laid back style that underpins the collection of songs is best enjoyed when it’s washing over you – and it’s probably fair to say that the band weren’t aiming to provide us with any profound lyrical insights. There are thoughtful moments scattered here and there, on ”Two Hours’ and ‘Ghosts’ especially, but the overwhelming message seems to be a carefree one. Living for the moment is the most important thing on the Theme Park agenda, and a lack of thematic depth isn’t really going to be enough to put a serious dent in this kind of album – this is a hugely charismatic debut that, above everything else, is just very good fun.