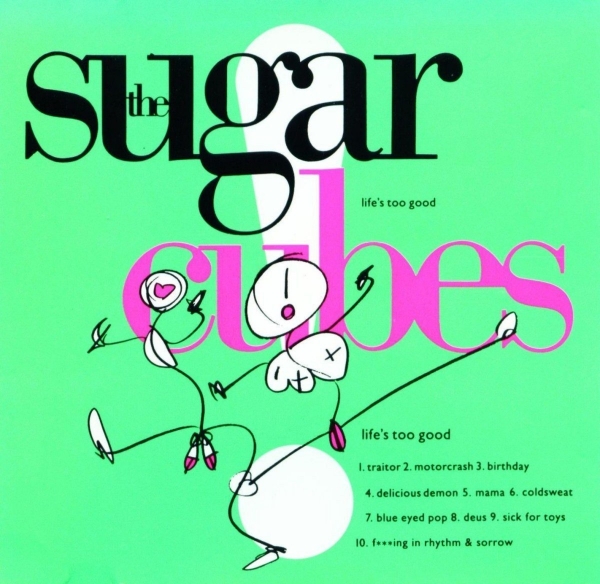 Released during a time when post-punk had become synonymous with monochrome and dour connotations of the gothic, Iceland’s The Sugarcubes’ comparably upbeat Life’s Too Good - about to be reissued on vinyl by One Little Indian - counteracted the often stringent seriousness of the alternative ‘80s, subverting the vitriol of the earlier post-punk movement by offering a colourful and imaginative substitute.

The band’s most revered and well-known single "Birthday" sounded emphatically jovial in the angry wake of Crass, ‘passe punk’ and over produced new wave. Pop at its esoteric finest, it was lauded by the likes of John Peel and Melody Maker; reached #2 in the indie charts, but was criminally overlooked in the official UK chart, entering it at just #65. A travesty - yes, especially considering it is the - if not one of - the most perfect pop songs ever recorded: sounding just as wide eyed and inspired now as it did then, its weird, melodic brilliance and depiction of childhood abandon evokes a certain kind of whimsical nostalgia, while Björk's piercing, defiant shrieks and seemingly cryptic lyricism would become a trademark of her subsequent solo work.

Much like The B52’s and Talking Heads, The Sugarcubes proved that post-punk could be playful and seriousness could be silly. "Birthday", despite being The Sugarcubes’ defining moment, isn’t indicative of the debut as a whole, though. In fact, as with some of the best LP’s, it’s hard to place this album within a specific genre, a persistent theme even in Björk's previous venutres. Having begun recording music as early as 1977, when she released Björk Guðmundsdóttir - an album of sickly sweet covers of rock songs - she soon found herself in bands that were similarly averse to the restrictions of meaningless categories.

Having previously explored punk (Spit and Snot, Tappi Tikarrass), jazz-fusion (Exodus) and gothic rock (KUKL), here, they dabble in myriad styles: from indie pop to experimental and dance; "Mama" and "Deus"’s prominent bass and jagged guitar lines, for example, recall the dub-punk fusion often extolled by the likes of Public Image Ltd. et al, while "Coldsweat"’s brooding, heavy punk-funk is very much of its time. The deceptively titled "Fucking In Rhythm And Sorrow" is a clever album closer, sounding like the witty antithesis of the experimental pop clamour that came before it. Björk tells the tale of a woman coming home from a bar to find a naked man lying depressed on her living room floor, as an erratic, skiffle-like rhythm builds: “You should use the pain and sorrow / To fill you up with power / Life’s both sweet and sour!” she howls. Something to keep in mind during those moments of despondency and existential crisis.

Björk's idiosyncratic voice might be the main prevailing aspect here, but however fleeting their existence was, The Sugarcubes were very much a band, with each member having their own respective pedigree in various other outfits prior to their formation. All members had previously been in various post-punk or experimental groups - their origins tracing back to the likes of Theyr and of course KUKL - while some even collaborated with Current 93 and various members of Psychic TV. The creation of The Sugarcubes was a direct result of the negation of the anarcho-punk route (KUKL released two record on Crass’ label) and the desire to create something more accessible. Einar’s spoken word contributions are as imperative as they are bizarre, and the contrast between his inane discourse and Björk's more popular vocalisations gives the band their famed uniqueness.

Despite its moments of innate pop brilliance, there remains a dark chaos on Life’s Too Good - repressed, but ever-present. An understated classic, and by far the band's best album, it still sounds vital 27 years since its initial release. It's strange but accessible, silly but genius, and ultimately unfailing from start to finish.