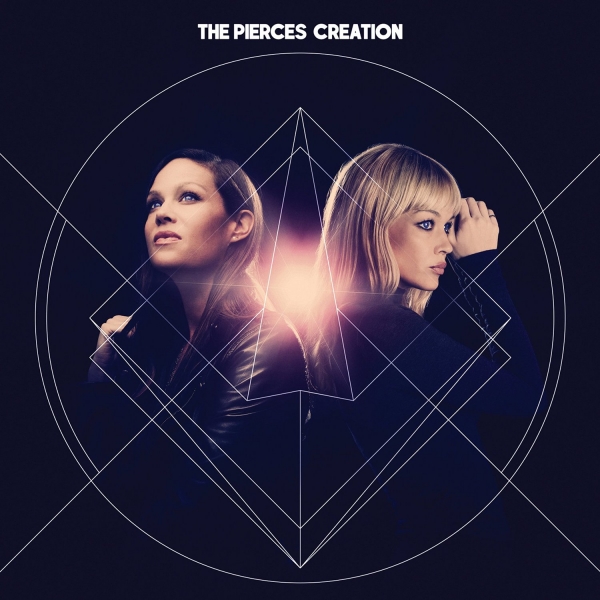 The Pierces, an Alabama duo consisting of sisters Allison and Catherine Pierce have largely specialized in a broad yet specific brand of modern folk. At times their strum-heavy aesthetic has been haloed by studio sheen and digital filigree, but never enough to completely obscure the bucolic center of the pair’s sound. The Pierces – up till now – have crafted acoustic music, regardless of all the plastic-y production that has swirled around it. But Creation, the band’s newest album (their fifth and a follow-up to 2011’s very good You & I) largely eschews the rustic organics of their previous records for something more synthetic and expansive. One only need contrast the cover of Creation, a vaguely science-fictional motif featuring the sisters framed by pop-futuristic shapes, to the retro-stylized images of past records to sense the pivot The Pierces are attempting to make. Indeed, given the ways in which the sort of stream-lined pop-folk The Pierces previously honed has now become easy soundtrack fodder for credit card commercials and studio-budget romantic comedies, perhaps the duo has chosen precisely the right time to defamiliarize the sort of comforting composing they do.

The boon in all of this is that the sisters maintain the fundamentals that make folk music so easily liked. A song like the album’s opening track, “Creation,” might feature a dazzling surface of massively echoing percussion, a bed of chattering keyboards, and rich polyphonic sound effects that chime around the band’s textbook harmonies, but one can still sense the strumming pulse beneath all of it, the ways in which The Pierces resolutely maintain the narrative structures of past albums and past influences. There remain songs beneath all the decoration and widened pallets. Elsewhere, “Kings” pairs a compelling sing-song melody to a jittery nest of prickly guitars and concise rhythm, sounding like a more terrestrial Kate Bush singing atop some amalgam of Remain In Light-era Talking Heads and height-of-his-powers Phil Collins (“I Can Feel”, the albums third song, invests even more deeply in Collins’ mid-80s version of soul-pop). Somewhat predictably, The Pierces turn towards a more digital understanding of pop music means a return to the early 1980s, but the duo’s sense of melody and narrative avoids pastiche, if it doesn’t quite avoid cliché.

Even better is “Come Alive,” a sharp, Clash-esque bit of idealized post-punk that evinces some affinity for fellow sister duo Tegan and Sara, a band whose move from folk-inflected pop-punk to cinematic electronic pop suites might just be an aspirational model for The Pierces. Indeed, “Come Alive,” like the best songs from Tegan and Sara’s excellent 2007 breakthrough Sainthood, gains purchase through its nervy sense of atmosphere. Sleek and fashionably minor key, the song is a revelation, a welcome new facet from a band whose previous qualities were all about transparency and extroversion, but who all of a sudden are excelling at more opaque, textured moodiness.

As is so often the case with albums like Creation—records that find bands daring to tear up old moves and comfortable registers—the album only stalls when it lapses into familiarity. “Honest Man” has a top-flight chorus (The Pierces have always been wonderfully adept at coming up with economic, moving hooks), but feels vaguely inert cycling through the folk-pop-meets-Wall-Of-Sound groove that has defined the band, and which they seem so keen on expanding beyond. That same nexus of considerable compositional quality and overly-familiar details extends to “Must Be Something,” a workman-like pop song that mainly disappoints because it doesn’t defy its own easily-liked legibility. “Monsters” does a better job interrupting its own folk signifiers with twitchy, elastic guitar and a vampy stomp. Perhaps we’ve been spoiled by the gift The Pierces have for these sorts of comforting, middle-paced numbers, but the more adventurous moments of Creation are also its most compelling. You find yourself constantly wanting to see The Pierces free themselves up whenever they rely on past instincts too long.

Better is the hazy, rich “Elements,” a spacious torch song that waltzes in pop romanticism, surrounded by velvety keyboards and managing some of the drama of Loretta Lynn alongside the atmospherics of ABBA. It is those moments of synthesis, where The Pierces trust their gift for song-craft enough to see how their ideas might sparkle in different settings, registers, and moods, that mark the best passages of Creation.