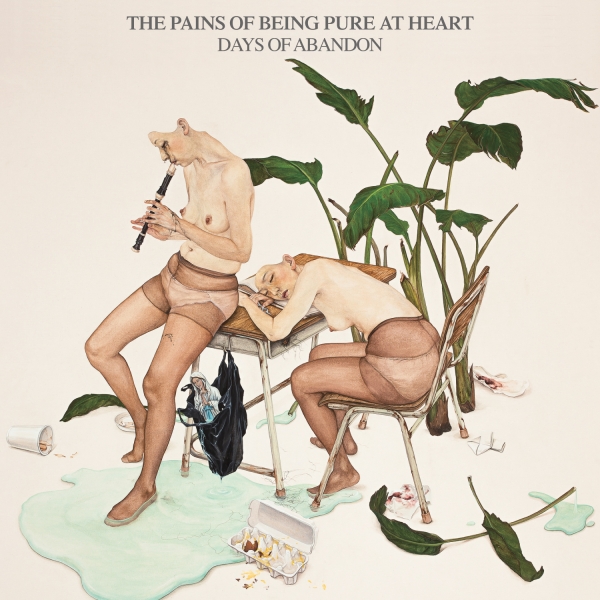 The cynics amongst us would probably have reasonable grounds for suggesting that bands like The Pains of Being Pure at Heart don’t have much excuse for letting three years pass without a hint of new material; after all, they hardly earned themselves a reputation as radical wheel re-inventors with their first two records. Putting aside all the usual tags they have thrown at them - C86 and twee both spring immediately to mind - they displayed a mastery of their sound in impressively quick fashion on their self-titled debut and 2011’s more expansive Belong, earning themselves fans as high-profile as ex-Scotland footballer Pat Nevin and my dad in the process. It just so happens that said sound is pretty derivative; it might well be no coincidence that both of the aforementioned men hail from Glasgow, a city that the Brooklynites are positively in thrall to.

The Pains of Being Pure at Heart breezed along at breakneck pace, an irrepressibly energetic lo-fi ode to the likes of Felt and Teenage Fanclub. On Belong, they cast a wider net in terms of their influences - the title track’s guitars, I recall, were pure Smashing Pumpkins - and whilst it certainly wasn’t as rough and ready as its predecessor, it still sounded a little rugged; distortion on the guitars, touches of fuzz to the vocals. Days of Abandon, though, is startlingly clean-cut; opener “Art Smock” disarms you completely, a gentle acoustic number with guitars that almost nudge towards folk.

Elsewhere, they’re largely channeling the peppy pop of the first record, and with any hint of rawness shorn away, the results are gorgeous. “Simple and Sure” is the record’s Ronseal moment; the chorus’ infuriatingly catchy refrain of “I just wanna be yours” is hardly groundbreaking, but matches the track’s laid-back feel perfectly. The guitars on “Masokissed” and “Life After Life” have Johnny Marr’s fingerprints all over them, but they’re both so irresistibly sunny that it’s hard to care. “Beautiful You” might be the highlight; it runs unusually long for a Pains track at over six minutes, but allows the song to simmer nicely; the soaring late guitar solo, in particular, is completely euphoric.

There’s some variations on the theme, too; “Coral and Gold” makes smart use of the loud-quiet dynamic and features lovely harmonised backing from Jen Goma of A Sunny Day In Glasgow. The myriad lineup changes that the band have undergone since Belong effectively serve to confirm The Pains of Being Pure at Heart as Kip Berman’s solo project - on Days of Abandon, at least - and the freedom to work with a host of new musicians seems to have worked wonders for his songwriting. “Eurydice”, all chiming guitars and thumping percussion, is practically anthemic, whilst Goma is superb on both “Life After Life” and “Kelly”, even if the latter is perhaps a bit too much of a throwback - it sounds a lot like “A Teenager in Love” from album number one.

“The Asp at My Chest” closes out the album on a subdued note, but does hint at some genuine instrumental expansion at last; Beirut brassman Kelly Pratt lends his horns to proceedings, and in doing so provides another hint that wide collaboration might signal the way forward for Berman. Days of Abandon, like everything before it in the Pains catalogue, will win precisely zero prizes for originality, but there’s a vivaciousness permeating every aspect of the record that breathes so much new life into its well-worn touchpoints. Indie pop at its most sparkling.