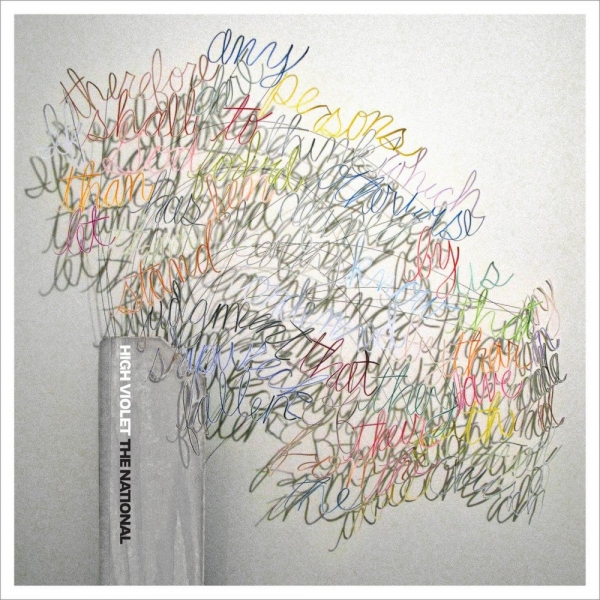 The first few records from the Brooklyn (by way of Cincinnati) quintet The National could be viewed as cathartic assimilations to the big city, with the group still finding their musical bearings while leaving fragments of their Midwestern upbringing behind them (and within their lyrics), as they struggled to adjust to the blinding bright lights of New York.

Their last two albums found The National advancing and expanding their sound considerably, evolving both their scope and their meticulous recording methods. Those reverential songs are all imbued with the band’s maturing spirit and the sordid seediness of the five boroughs, with hazy tales of spies, sunglasses, icy drinks, and sleeping in your best clothes while worrying about overdoing it. The laughter heard through the walls was perhaps a bit too close and claustrophobic for the band, but at least it provided them with plenty of first-rate material that they turned into the stellar, eloquent odes to our isolated times featured on Alligator and Boxer. Which brings us to the National’s fifth album, the sublime High Violet, which strikes me as being the band’s attempt to escape from both the confines of city dwelling and the sky-high expectations of the music world, retreating instead to the insular, bloodline-based ideals that the tightly-knit band was founded on. As Matt Berninger sings on the somber beauty of ‘Lemonworld,’ “So happy I was invited, gave me a reason to get out of the city.” And, while the record doesn’t necessarily reflect that sense of happiness throughout, it seems that the album itself provides the entire band with a collective reason to get out of the city (and into their heads), and that searching, restless nature permeates all eleven of these ornate, regal songs, producing a modern masterpiece of style and splendor.

High Violet is incredibly lush and rich sounding, with every song poured over delicately by every member of the group; while the finished version is often the result of a tense tug-of-war between bandmates over which direction the track is going to go. And those slight, calculated decisions might not be obvious at first listen, but after hearing the songs multiple times, those nuances and subtle variations become more pronounced and pulse at the heart of their layered, luxurious arrangements. ‘Terrible Love’ gets the record off to a cautious start, with a slightly distorted guitar riff reminiscent of U2′s ‘All I Want Is You’ seemingly coaxing Berninger out of the shadows in order to deliver his lyrics about spiders and not being able to fall asleep without a little help. The elegant, faint piano strains form the cornerstone of the track, until Bryan Devendorf’s drums and the dual guitars of twin-brothers Bryce and Aaron Dessner take the song to loftier realms. ‘Sorrow’ and ‘Anyone’s Ghost’ both are reflective glimpses into how our past colours how we see our future, with Berninger stating that he “doesn’t want to get over you” and “didn’t want to be your ghost,” which leaves the subject with no choice but to be rooted cautiously in the present while casting a watchful eye about them, making sure they don’t repeat past mistakes-either their own or those of others that have subsequently shaped their lives.

While the songs on High Violet might not be as immediately affecting and compelling as those on their last two records, these tracks have a lasting, absorbing appeal that only flourishes over time, allowing the listener the space to grow into the songs like the band surely did during the lengthy recording process. However, the measured majesty of ‘Afraid Of Everyone’ (with Sufjan Stevens on harmonium and backing vocals) and the first single ‘Bloodbuzz Ohio’ will immediately transfix even the most jaded music fan, with the simmering menace of the former leading gingerly into the wistful charm of the latter, all while forming the potent, stirring centerpiece of the album. With lyrics as evocatively grand as “With my kid on my shoulders I try not to hurt anybody I like” and “I never thought about love when I thought about home,” it’s impossible not to get swept up in the heartfelt sincerity of these songs.

‘Lemonworld’ apparently tormented the band right up until the end of the recording session, with the members going back and forth about how they wanted the delicate track to sound. The end result sounds more like a polished demo version of the song; simple, but densely layered, with a gradual swell that never fully breaks the tension of the track. That anxious sensation transfers seamlessly into ‘Runaway,’ a gorgeously understated number that benefits from the muted horns and intricate guitarwork layered throughout the song. Berninger’s honest appraisal of the thorny trials of relationships only enhances the vulnerable appeal of the song: “We don’t bleed, when we don’t fight. Go ahead…throw your arms in the air tonight. What makes you think I’m enjoying being led to the flood? We’ve got another thing coming undone.” The lyrics are intentionally ambiguous enough for any listener to shape them to their own lives, making the songs much more personal to the audience than perhaps the band even intended, which explains the National’s slow but steady rise to prominence in the indie world. These songs started meaning the world to their fans, who took them to their enervated hearts with an intensity rarely shown in the hipster set these days.

‘England’ is perhaps the band’s best song to date, full of textured but frayed emotions, cascading down on the listener like the London rain so central to the song’s meaning. It’s a dynamic, propulsive track simply fraught with sentiment, and even though it’s never quite clear what Beninger is singing during the song’s explosive coda, you can’t help but sing along simply because you want to be part of the rousing chorus and not left behind at home. The record closes gracefully with the mournful ‘Vanderlyle Crybaby Geeks,’ whose peculiar, awkward title belies the raw emotions contained within. Bon Iver’s Justin Vernon adds vocals to the song’s melancholy chorus, and by the time Berninger conclusively exclaims “I’ll explain everything to the geeks,” you get the sense that he’s exhausted every part of himself on this record, and that the band has nothing more to say-for now, at least. And when you’ve crafted such a lavish, poignant album like High Violet, there isn’t a reason to say anything else; just tour the world with your exquisite music, and let the scribes struggle to find appropriate superlatives that won’t ever come close to capturing the solemn grandeur contained within these songs.