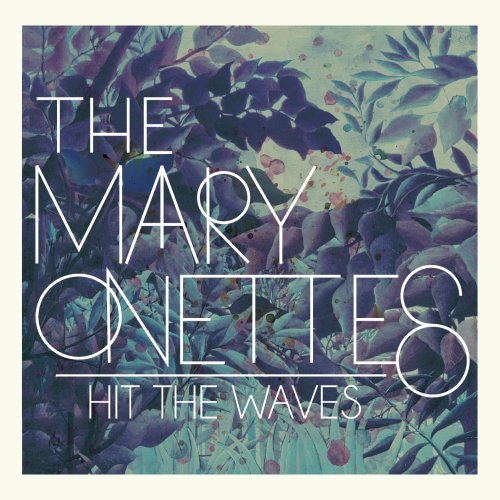 Perpetually calling out behind a foggy haze of sparse, ethereal soundscapes, The Mary Onettes return with their third full length and first album proper in five years. The band’s five-year silence is an indication of an unrelenting persistence: their perfectionist dispositions are immediately palpable once presented with something as meticulously crafted as Hit The Waves. It’s clear from the start that a lot of time and exertion went into making this record: it’s a shimmering denouement of the band’s assiduity; a refined, perfectly sculptured collection of songs that weave in and out of sonic consciousness.

Of course the band’s aesthetic alludes to similar qualities that the new-fangled dream-pop contingent exhibit, but it’s sometimes easy to forget that The Mary Onettes have been making this sort of celestial euphony for thirteen years; and instead any element of “dreaminess” are replaced by lush, electronic production and sweeping instrumental currents. Hit The Waves is sophisticated and polished but doesn’t lack earnestness, there’s a real sense of style over substance as each attentive, sonic soundscape washes gracefully into the next with clarity. And that’s exactly why I find it so difficult to pin-point its downfall; indeed it is a sleek slice of well-crafted Swedish indie-pop, but despite the florid production and carefully assembled compositions it’s not explicitly triumphant and the album in its entirety leaves me somewhat cold.

The highs only just counterbalance the lows, and while there are tracks that swell and soar into greatness others lack coercion and sustainability, momentum coming and going, often straying a little too far into the distance so that before you have time to catch up, it’s gone. That said, here are plenty of conquering moments: the opener and beautiful instrumental ballad ‘Intro’ is everything an intro track should be: short, simple but affecting. Contemplative piano coalesces with harmonious vocal cries; it’s a sentimental precedent to the juxtaposed ‘Evil Coast’ where melancholy meets optimism. There appears to be a persistent lyrical theme throughout the record; despite the album’s buoyant exterior and jovial melodies, it seems consumed with a deep malaise, heard within frontman Philip Ekstrom’s vocal strains that are often eerily reminiscent of Robert Smith‘s plaintive yearns. This adds an emotional depth and complexity to an otherwise seemingly feel-good affair, but it runs the risk of occasional over sentimentality.

Title track ‘Hit The Waves’ is a habitually ’90s Peter Gabriel moment where the pace livens but depth remains intact and producer Dan Lissvik (Taken By Trees, Young Galaxy) shows a deftness for slick, stylised production techniques. By the time we reach the mid-way point, however, things begin to merge together and everything starts to sound similarly gushy and without any real lasting effect. Toward the album finale things pick up. ‘Unblessed’ contains a plethora of old synthesizers and fleeting idiosyncratic details, like the sample of seagulls which enriches the song, adding an interesting element that calls for your attention again following a mid-album lull.

There’s so much to like about Hit The Waves, but it’s definitely one that augments in force over time. Ultimately though – this is an album that, as elegant and refined as it is, will be forgotten about soon enough. That’s not to say it doesn’t deserve to be extolled for the hard work alone. But instead of successfully manufacturing a nostalgic prelude to the new wave movement of the mid ’80s, it feels incredibly dated and more of a retrograded attempt to revive it.