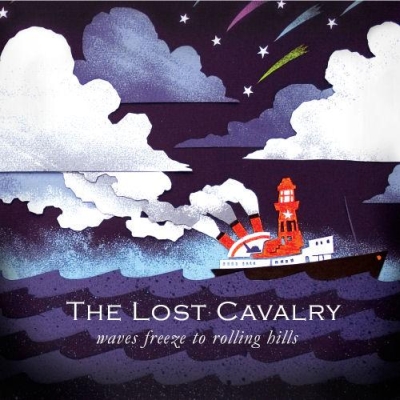 Helmed by former Fanfarlo man Mark West, The Lost Cavalry are putting out this debut EP on their own label Two Six Heave. As you may have noticed, sea-faring references abound, not least the imaginative title (one of the best of late? I believe so) and the great, salt-caked cover by the band’s resident glock-man Toby Atkins. You can almost smell the sea breeze, but whilst there is just a touch of the sea shanty feel to be found on these four tracks, the band’s more earthy name betrays the fact that Waves Freeze to Rolling Hills is a missive from London’s burgeoning folk scene, existing somewhere on the axis between fellow cityfolk Left With Pictures and Mumford & Sons.

Yes – acoustic guitars, glock, accordion and ukulele are all in evidence, but the skyscraping epic-folk of the family Mumford is absent, replaced with a more lilting, back-and-forth tidal repetition used most notably on opener “Oh Sally”. More surprisingly, there’s a brief bleepy electronic section in the track which whilst a little jarring upon its first appearance, makes more and more sense with each successive listen and should encourage West’s crew to make more of this element in subsequent recordings. Indeed, the fact that Waves Freeze sounds so polished despite its mostly home-recorded origins invites serious anticipation as to what these chaps could achieve given a larger canvas than a four-song EP and the myriad benefits of additional resources.

Perhaps the best encouragement to keep an eye out for The Lost Cavalry is the closing track here, “Only Forward”, from which the EP borrows its title. Like a cosier, icier version of the Watchmen graphic novel story-within-a-story Tales of the Black Freighter, it’s a meditation on isolation on a bleak ocean, demonstrating the Cavalry’s ability to create an impressive sense of atmosphere with the ample skills at their disposal. Nautical but nice.