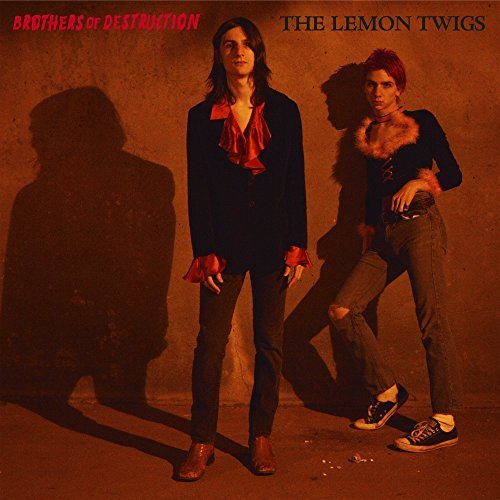 Composed around the same time as The Lemon Twigs’ debut release Do Hollywood, the Brothers of Destruction EP is not dissimilar to their first born prodigy; a last hurrah to the glam-baroque phase their music has, till now, dressed up in.

And a lot of fun they've had in the characterisation of some of their favourite artists of the ‘60s and ‘70s, which some lazy listeners have condemned copy-catting. It’s true, the D’Addario brothers do draw from their rock predecessors, but they do so by way of musical experimentation as a route to forming their own identity; the Do Hollywood ‘era’ as it has been described, being Act 1 in their play.

The theatricality and humour of The Lemon Twigs lifts their heavily referenced work into modern day relevance; the first release from the EP, “Night Song” coos through a Beatle’s-esque instrumentation “we watched the highway patrol take selfies with my wife”. The D’Addario brothers write their songs independently of each other and it’s through Michael, the youngest of the pair, that we get this playfulness. In Brian we get a more reverent offering, the track “Beautiful” being the most pensive track on the EP; “I am nothing / I am no-one / it’s wonderful”. The dichotomy between the duo brings real light and shade to their newest release.

The Brothers of Destruction EP obliterates the last of this 60’s/70’s influenced chapter of work, “Night Song” ending on an outlandish gunfire scene.

So what’s next for The Lemon Twigs? They’ve been known to experiment with different genres before – the music they produced before their first release was akin to Tame Impala and MGMT. There are no clues yet, but their flair for acting will enable them to change roles into whichever new genre or time period they choose beyond the ‘Do Hollywood era’.