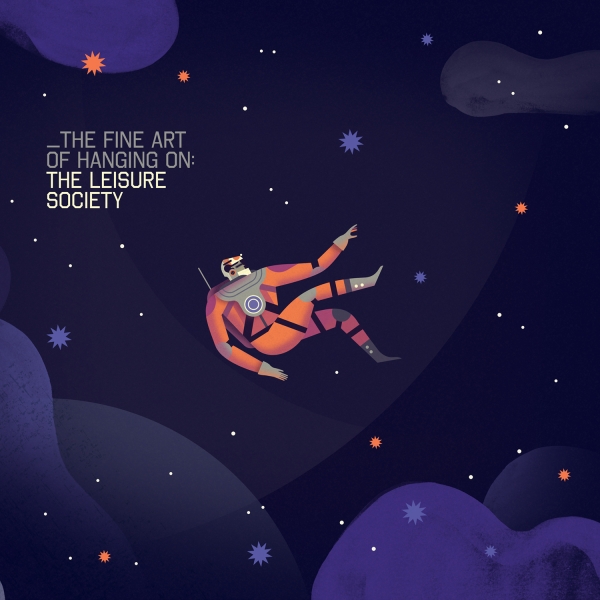 That The Leisure Society have some serious songwriting chops is hardly a surprise; after all, the outfit’s founder (alongside multi-instrumentalist Christian Hardy) Nick Hemming was nominated for the prestigious Ivor Novello Award for cuts off not just one but two consecutive albums, and songwriting luminaries of the stature of Ray Davies have declared their support in the past.

Hemming hasn't lost his touch. A loosely themed collection of songs about holding on to something - be it a strained relationship, a career in an industry that is way past its peak viability, even life itself - The Fine Art of Hanging On fine-tunes The Leisure Society's trademarks: brilliantly observed, carefully crafted lyrics and rich melodies placed in an assortment of folk-rock and baroque-pop (check out the sumptuous coda to “Wide Eyes at Villains”) settings that manage to combine richly layered detail with disarming directness.

You could describe this sort of complex and compassionate songwriting with the terms adult, mature or grown-up, did that not bring to mind various bone-dry and polite balladeers dispatching their wares with all the urgency and passion of someone penning a shopping list. The Fine Art of Hanging On isn't like that at all.

Sure, Hemming's a master craftsman but there's no sense of routine or detachment in cuts such as the utterly hypnotic "Tall Black Cabins", possibly The Leisure Society's most compelling individual cut since 2008's breakthrough track "Last of the Melting Snow". A snapshot of an industry in crisis but still, well, hanging on, it proves a deeply haunting, instantly unforgettable listen: faint praise as it may be, it must rank as the most moving tune ever penned about the economic plight of the single boat fishermen. The quietly grand, slow-motion sweep of "All Is Now" is every bit as potent. These are battered but unbowed songs about lives in various states of crisis but still ploughing on with as much dignity as possible, snapshots set in a permanently overcast but far from joyless place where flames flicker low and “all is blue” but still, ultimately, worth going through.  With a generous assortment of instruments – flute, horns, strings - popping in and out of mix, The Leisure Society could musically speaking easily pass off as a UK equivalent of Sufjan Stevens around Illinoise (“Nothing Like This”, the expansive second part of “I’m a Setting Sun”) or an Elbow (Guy Garvey’s another vocal fan) with no pressing need to project to the back row of an arena.

The Fine Art of Hanging On isn’t entirely free of faults. Hemming and co's way with the more downcast material is so compelling that, for all their strengths, some of the jauntier material seems lightweight in comparison. At times, there's also a slightly too noticeable lack of edge to the album's sound; for songs dealing in such heavy subject material, it can all flow by a bit too smoothly. That said, when the final track "As The Shadows Form" - a misleadingly upbeat folk stomp about facing life’s final curtain - declares that "I know it has to end” and then grinds to an abrupt halt, you really wish it didn't.