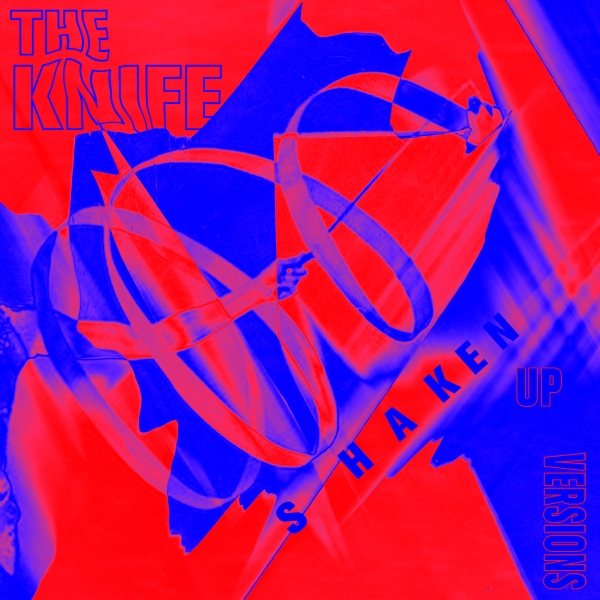 The Knife are a twisted, Lynchian dream. They suckered you in with steely organic electro, then sucker-punched with an album brimming with subversive intent and a live show straight out of Mulholland Drive. Shaken Up Versions, the sound of their identity-bending, divisive live show, has now been given a physical release, free to move house parties, warehouses and nightclubs. They may be dead, but their ghost lingers in the form of this; somewhere behind the decks at their own leaving do.

The Knife’s sound always came easily. It felt organic. Bleeps and whirrs with the randomness of organic life evolved and coalesced, giving birth to a powerful groove, or not. Polyrhythms wrapped themselves around each other like the duo’s DNA. The change of direction on Shaking the Habitual was profound, but then The Knife’s sound had always been a complex one. In amongst synthpop butterflies were always darker creatures, night dwelling, and they never took the easy route to win your affection.

Dense forests of instrumentation often made them hard to love and Karin Dreijer Andersson’s vocals have always struck the ear oddly; even when left undistorted they were somewhere slightly sharp or slightly flat which only served to give a human, quality to their unforgiving electronica. Despite their other-than-human imaginings (remember the terrifying bird masks?) it all seemed founded on human, creative instinct. An instinct they left unrestrained on their studio swansong with free-form, amorphous results, and mirrored in their live show: interpretive dance, meditation, aerobics and an ambivalent attitude regards reality all seemed like a manifestation of the band’s Freudian id.

The sound of this id, and thirteen years of evolution, is Shaken Up Versions: the tweaked and reimagined sound of The Knife, live. The groove is more prominent, 4/4 kick drums ring out clearer above stabs of synth; a clubber’s metronome. Their weirdness, the inaccessible elements of Shaking the Habitual and others are still present; it has detuned, sexless vocals and tight knit instrumentation, but always central is the serious business of dancing. It could almost seem like an apology for the dense, drone heavy album previously; except I get the impression The Knife aren’t in the business of making apologies, not for their music at least.

“We Share Our Mother’s Health” opens and gets the tribal treatment; rattling snares are more prominent above a turbocharged bassline. Throbbing, heartbeat techno in the form of “Stay Out Here” and “Silent Shout”, is both hypnotic and relentless. Both retain the tone of the original, making this something of a lateral move: the violent, dischordant brass of “Stay Out Here” is relegated from the foreground in favour of four to the floor and a shuffling hi hat, the brilliant “Silent Shout” being merely stripped back into skeletal, minimal form. Those syncopated synth arpeggios remain the star until brutal stabs of synth take your breath away in the closing minutes, and both (although not a radical transformation) are brilliantly executed, providing relief from the oppressive (and almost untouched) “Ready To Lose”.

Whilst both tracks are highlights, it is the older material which undergoes the most radical change. “Bird”, the only track from their eponymous 2001 debut, is entirely rebuilt; invigorated again in tribal form. Drums jitter all over the remix and provide the driving force, whilst a threatening bassline is only vaguely recognisble. The instrumentation is infinitely more complex and by comparison the original, with its repetitive childlike synth, seems twee and pedestrian.

“Got 2 Let U” sheds the 80s bassline, but retains the same sultry, burlesque feel albeit through a kind of fever dream haze. A 4/4 kick immediately signposts its new techno flavour, as does metallic synth and Dreijer Andersson’s vocals are pitched down slightly less for the ‘male’ section. They remain slinking and sexual, all the more disquieting given the context of an abusive man. “Pass This On”, far from the Balearic sun of Deep Cuts is now a steely house, peppered with rave claps. The signature steel drums here provide an ironic, almost mournful brightness to the stark Scandinavian sound.

In essence this is the band that they became covering the band they once were. Telling is that on “Pass This On” the lyric “I’m in love with your brother/what’s his name” has been changed. Andersson is now in love with her sister, an integration of the gender politics seen on Shaking the Habitual. The use of gender-neutral pronoun ‘Ze’ and the androgynous ‘male’ vocals in “Got 2 Let U” and the drastic change in the direction of “Bird” all speak of a band reimagining their past in line with their present. insomuch as Shaken Up Versions is the sound of their final live show, it neatly encapsulates the entirety of the band’s journey: rather than a mulligan, or a rejection of their past work these live versions feel more like looking back with hindsight.

On record, it is a cohesive force, pulling you close and whispering words of reconciliation: “This is what we meant all along, we just didn’t quite know how to say it back then”. On a more basic level, it’s the sound of the duo having fun in their own masked, avant garde kind of way, and as an album it hangs together well. It’s a bunch of great dance tracks that should preserve their live sound in its natural habitat: I’m sure Marcel Dettmann has a physical copy pre-ordered. All in all, it’s a fitting epitaph.