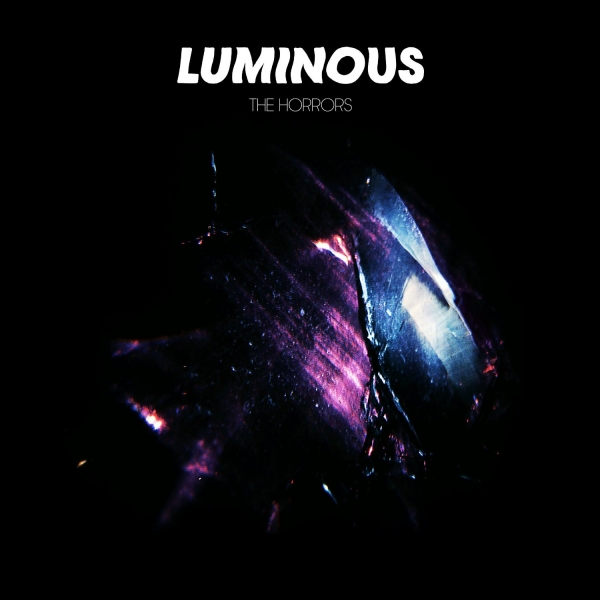 When The Horrors arrived in 2007 with their schlocky, Cramps-indebted debut, Strange House, expectations were pretty low. For them to change their fortunes so drastically was hugely unexpected, with the krautrock sodden Primary Colours of 2009 and the subsequent shift from komische to baggy-psych on Skying two years later coming as a shock - especially as the latter of the two albums planted them firmly into the top five of the album charts. Somehow, The Horrors became a big deal.

Originally scheduled for release last September, their obsessing over minutiae resulted in them missing their deadline and work on the album continuing. Yet whatever they’ve been doing has worked – this is a fully immersive listen, full bodied and intricate, not only in terms of the musicianship but also production, (again handled by the band alongside Craig Silvey). Whereas the sound of Skying suffered at times due to a muggy recording, Luminous is given a full pop sheen, an approach that’s resulted in a much wider sound. That said, there’s nothing as instantly gratifying as “Mirror’s Image” or “Endless Blue” here. You do have to work at these tracks, but once immersed inside you’ll find no claustrophobia, nothing gritty, just gloriously uplifting pop.

Faris Badwan has changed his vocal stylings noticeably. No longer a gothy concoction of singers it’s pointless to mention, he’s now singing with a tempting, drowsy croon. Musically, Joshua Hayward’s guitar playing is less prevalent than on past work, a side-step that brings the rhythm section of Rhys Webb and Joe Spurgen to the forefront. It’s a shift best executed on the fantastic “In and Out of Sight” - the most electronic offering here, it re-imagines the 80’s pop of China Crisis remixed by Patrick Cowley.

There’ve been rumblings about The Horrors going ‘electronic’ and to an extent, that is true. We’re not talking Kompakt or U.R style, rather that they’re now using the methods of electronic musical patterns as a base, and building from there. It’s best executed on the three minute ambient build up on opening track “Chasing Shadows”; the textural synths working as a re-imagination of LFO’s work of the mid 90s, it breaks into a mélange of shuffling beats and crunching shoegaze guitars with Badwan’s most direct vocals. It’s a thrilling start.

Lead single “So Now You Know” has been subject to fan criticism (“too poppy” cried some, “too clean”, said others), but within a long-playing context, it makes total sense. The Radiophonic Workshop style synths, a subtle use of a 303 drum machine, a total ear-worm of a chorus and a soaring guitar solo result in The Horrors at the most epic they’ve ever sounded. The eight shattering minutes of “I See You” are equally as big; full of arpeggiated synths, the blatant steal of the guitar riff of Echo and The Bunnymen’s “Dancing Horses” and romantic lyrical musings ( “See the way the valley starts to grow, every movement seems to be for you, I can see your future in it, I see you”). This impassioned declaration is a first from Badwan in that it shows a heart beyond that steely composure.

There are more recognizable Horrors sounds on show too; the pastoral jangle of “First Day of Spring” has a surprising C-86 indie jangle to it, the thick guitar sludge of “Jealous Sun” uses an electronic wall of sound that manages to come across as delicate and also robust, and “Change your Mind” is a lullaby-esque hyperballad driven by the spacious synth of Tom Furze and more heartbroken lyrical yearning.

The Horrors are done with moping around. Forget shoegazing; any gazing being done is upwards, beyond the sky - much, much further than that.