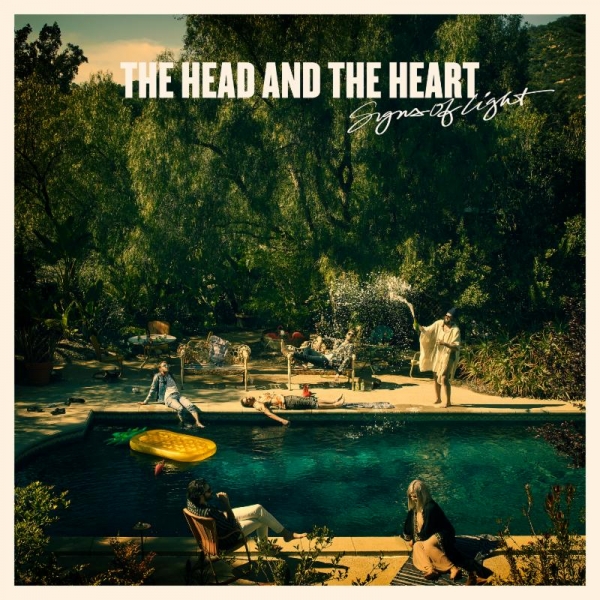 A lot of people might have been taken in by The Head and The Heart on the basis of their first record; it’s understandable if their then-burgeoning fanbase thought they were something else.

Their self-titled debut was a delight; all ramshackle charm, with harmonisation gorgeous enough that you could forgive their routine lapses into Americana cliché - all ‘whiskey rivers’ (“Down in the Valley”) and ‘watchin’ the wind blow through the front yard’ (“Heaven Go Easy on Me”). They were signed to Sub Pop, who seldom put a foot wrong, and toured the UK with the biggest names indie rock has to offer - Death Cab For Cutie and My Morning Jacket, to name a couple. They looked and sounded every inch the ragtag gang of misfits, who’d finally found each other in Seattle and come together to play some honest-to-god folk rock.

That was never really the case, though. The Head and The Heart, deep down, are a pop rock group - not that there’s anything wrong with that. On record number two, Let’s Be Still, we were greeted by an altogether more stylish outfit, once that didn’t mind writing songs that glaringly referenced Tom Petty and Fleetwood Mac and one that happily embraced production that was polished enough to see your face in it. That record broke the top ten in the States, and you only have to look at the group’s tour schedule to know that they saw their home market as their most lucrative; they toured there exhaustively, and were hitting the kind of amphitheatres (Red Rocks in Colorado, the Greek Theater in California) that they’d only previously opened at. As far as the alternative music world goes, they’d made it.

And now, they’re back, with their major label debut - they’ve jumped ship to Warner Bros. Such moves, in the internet age, don’t mean anything like as much as they used to, but in this band’s case, it seems significant. It felt like they were always driving for this and, crucially, it does seem as if the age-old and oft-redundant rule that as commercial appeal grows, creative excellence declines is applicable here. Signs of Light is a big, bright billboard of a rock record. It’s perfectly passable, but everything that marked The Head and the Heart out as potentially exceptional has been buried, and everything that might notch them a big TV ad or 2017 summer awash with festival singalongs has been brought to the fore.

What’s more is that, unlike on their debut, everything that seems experimental or adventurous here ultimately ends up a mirage. “Rhythm & Blues” opens promisingly, thumping percussion and urgent synth lines, but soon collapses back into the same sort of ‘indie folk’ template that’s served the likes of The Lumineers and Edward Sharpe and The Magnetic Zeros so well these past few years. Similarly, “False Alarm” runs with percussion that’s heavy on groove, and promises to go somewhere new. It doesn’t. It’s only a matter of time before the song collapses under the weight of its oh-so-shiny production.

There were moments on The Head and the Heart that hinted at something else; the piano stomp of “Coeur D’Alene”, for instance, or “Ghosts” and its irresistible melody, but on Signs of Light, it all too often feels like a box-ticking exercise.

Straightforward, roof-down driving anthem? “City of Angels”. Piano ballad that comes off like “Let It Be” as channeled through an American aesthetic for the five millionth time? See the title track, which closes the record and eventualy morphs into a fists-in-the-air rocker-by-numbers. Milquetoast reliance on jaunty synths to complement the standard template? “Colors” fills that post, although it at least allows Charity Rose Thielen a rare solo vocal turn towards the end; her soulful delivery and ear for harmonisation were a massive part of The Head and the Heart in the past, and quite what she’s done to earn such a outright demotion here remains to be seen.

It’s worth pointing out that the songwriting throughout Signs of Light is perfectly solid, and by no means is it an offensive listen; the understanding of melody is palpable and the construction of the tracks exemplary in places. Funnily enough, the tracks that you might normally accuse of being filler, of bloating the album beyond its necessary running time, are the ones that stand out - “Oh My Dear” is all nervous guitar shimmer, and “I Don’t Mind” is the one real earworm, the one cut on which the guitars are genuinely irresistible. It’s not enough, though; most of the good ideas here have been drowned in arena rock ennui, and there aren’t that many of them to begin with. The thing is, there’s a nagging feeling that that’s what The Head and the Heart were after all along.