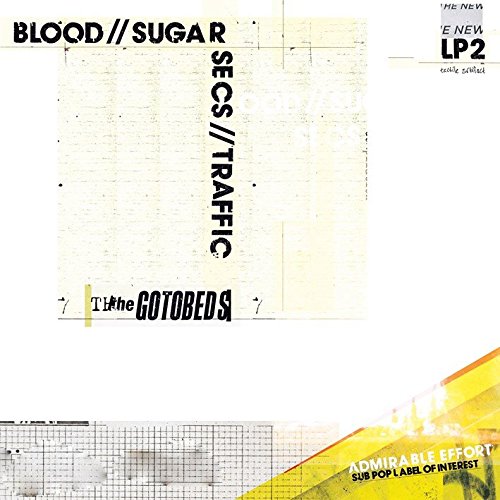 ​For a record steeped in off-kilter post-punk and chaotic garage rock, Blood // Sugar // Secs // Traffic retains a surprising amount of pop sensibility, providing it with an accessibility other records of its genre lack. ​Despite this, it’s still a record that clatters and cavorts with wilful abandon; the deranged Frank Black vocal yelps the perfect accompaniment to the screeching guitars.

"Real Maths/Too Much" sets the precedent immediately, its apparent simplicity belied by an inability to adhere to just one time signature. The result is an opening number of snotty garage pop, the stop-start nature having little effect on its blistering pace – something which doesn’t relent until the aptly titled "Rope".

Sinuous and somewhat noodle-y in its twin guitar lines, "Rope" meanders and lopes towards a fractured, disjointed conclusion, its guitars often collapsing in on themselves, before emerging from the chaos as one of the scrappy, Cribs-like guitar lines that are a staple of Blood // Sugar // Secs // Traffic. Elsewhere, the pace is dialled back further. "Red Alphabet" is a dark, brooding effort, the only one of its kind, and arguably the record’s weak link.

That the composition of the record (and as a result its tracks) feel fractured is no surprise, the album was recorded in bursts in a basement in Pittsburgh throughout 2015, it and is one of the rare instances of a staggered recording process serving to benefit a record’s overall aesthetic.

Disjointed it may seem, but the pervading sense of chaos and feel good factor tie each track on Blood // Sugar // Secs // Traffic together perfectly, coming to a frothy, tumultuous head on closing cut "Amazing Supermarkets".  Arguably the record’s highlight, it’s almost seven minutes of anarchic garage pop, mirroring in miniature the album it concludes effortlessly.