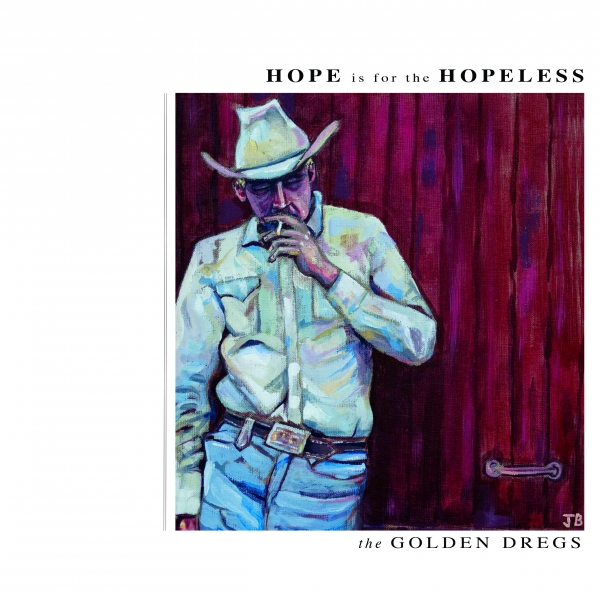 The South London-based project, brainchild of singer-songwriter Benjamin Woods, mine a rich vein of bittersweet ennui on this tender follow-up to a punchy 2018 debut.

Decamping from Falmouth’s coastal climes to the capital, The Golden Dregs lend a streetwise silt to their cache, a dusky afterglow overlaying the rustic tundra traversed on Lafayette. Where the latter flexed between The Allman Brothers Band’s scrappy southern rock and Room On Fire-era Strokes in approach, Hope Is For The Hopeless plays a slick, notably more polished hand; boasting an interplay of delicate tonal tilts that glide in a fine-tuned fusion.

Deployed with dry disaffection, Woods rolls through a dimly lit nocturnal landscape; cynicism wielded with seasoned sophistication, eclipsing that which could be reasonably expected from a sophomore effort. A sense of maturity can certainly be detected in the pool of influence bearing on its weather-beaten outlook, as well as its range of stylistic cadences; traces of alt-country, neo-psych and glam-rock coalescing in a skewed trinity that unfolds with tranquil, flowing fashion, furnished with a smooth artistic acumen that proves a rare trait. The crooning, Arthur Miller-nodding, “Death Of A Salesman”, for example, harks to early-'70s Roxy Music and Fifth Dimension-era Byrds for inspiration; a showering of strings blazing alongside lyrics entrenched in knowing resignation: “No, I don't believe in much / A fearful thing, to love what death can touch”. A combination of seductive textures and jagged wisdom that never ceases to allure.

The outfit invoke a bygone late-twentieth century aesthetic throughout the LP’s eleven-track expanse; a sojourn seared with nostalgia but unquestionably fresh in execution. Channelling the baritone drawl of Lou Reed on “Nobody Ever Got Rich (By Making People Sad)”, Woods walks on the wild side of tumbleweed-strewn Americana, skirting through a credo rooted in acceptance and weariness: “Loose loose end / Tattered in pieces I know / Needles and threads won’t mend”. But it’s the rippling “Queen Of Clubs” that presents The Golden Dregs at their simmering best; climaxing in a concoction of ascending sax and keys, while the wired quasi-psych-country of “Pathos” and “Just Another Rock” pivots between Captain Beefheart and Meat Puppets respectively; lilts of Todd Rundgren tearing through at the edges.

Carveresque in its brooding blue-collar undercurrent, Woods establishes the tectonics of a living breathing environment, a soundtrack to happy hour in some smoke-ridden edge-of-town bar; therein which lies its indubitable magic. The beauty of Hope Is For The Hopeless is distilled through its whisky jar half-empty lens, a panoply of frayed flickering sonic snapshots which repeatedly reward; inviting and enticing into a heady urban safari that the listener can just sink and fade into.