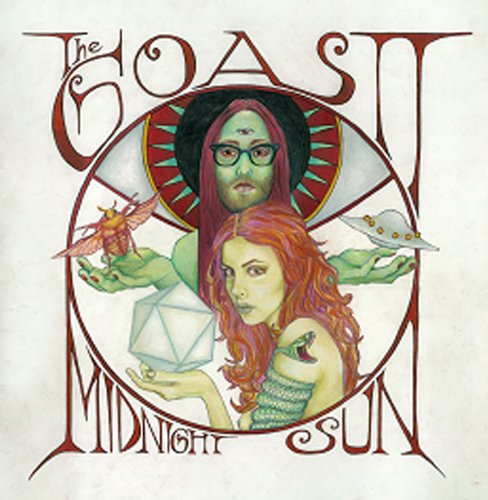 While psychedlia in all its forms continues to play a more apparent role in new music, for Sean Lennon it’s a natural influence that flows through his veins. As the son of the man behind most of “Tomorrow Never Knows” and all of “#9 Dream”, an experimental nature is clearly also a second one. Previous solo albums Into The Sun and Friendly Fire continued in a similar style to John Lennon’s more honest moments (the acoustic ballads, the piano-lead romantic songs) but Midnight Sun dives straight into the swirling stream of untried effects, spiritual lyrics and drums that vibrate around walls of sound. Together with girlfriend Charlotte Kemp Muhl, The Ghost Of A Saber Tooth Tiger’s sophomore release builds upon the steady foundations made on debut La Carrote Bleu.

And it’s an “Instant Psychedlia’s Gonna Get You” moment from the off, with “Too Deep” beginning proceedings. Whereas sceptics have questioned the authenticity of newer acts riding the waves formed in the 60s, and whether their findings are perfect or pastiche, for Lennon it’s the music he should be making, and continues his Father’s legacy with an equal amount of esteem and excitement. Beatles’ children’s’ music is more often than not a disappointing release, with the lack of current rumours about them forming a band only a positive thing, but “Midnight Sun” proves the theory wrong. By being unafraid to turn up the grit of the guitars and building the wall of sound above the foundations of their debut even higher, it manages to set a more recent benchmark for newer acts to reach, but is still similar to acts who have toyed with the genre before it’s more mainstream return.

“Devil You Know” is undoubtedly a rock song, with distorted, swirling rhythms and deep drums giving it a hint of The Flaming Lips or Beck, while the title track is similar in style, but with an extra dose of glam rock thrown in to the mix, and sitar effects that continue with the dream theme of “Tomorrow Never Knows” (while there’s even Paul McCartney-esque playfulness on “Poor Petty Gray”, possibly a friend of Maxwell’s…). Primarily, Sean takes the lead vocals and although not quite as strong as John’s, the Lennon tone is clear, arguably even more so when it’s distorted and filtered, as heard on “Great Expectations”. With a folk-like charm, it’s conjures images of stories and legends, while more memorable characters are referenced in “Last Call”, where Muhl joins Lennon on vocals during a film-like flight “down the yellow brick road”; passing the scarecrow and co as they go slowly, before pausing for the sort of escalating instrumental outro that can also be heard on “Johannesburg” and overshadows all previous vocals during the second half of “Moth To A Flame”.

While there are moments akin to recent releases from Tame Impala and Temples (with “Xanadu” sounding like a B-side from the latter band), GOASTT – as they’re also known as – appear to be able to slow the moment down more authentically, with “Animals” expressing a more spiritual stance through tribal beats, without it sounding forced or clichéd. “Nostalgia wants to be my friend,” Muhl sings on “Johannesburg”, and while that may be the case, it’s a friendship that respects the parents, is still exciting and - despite the need to reminisce - is also forward-thinking.