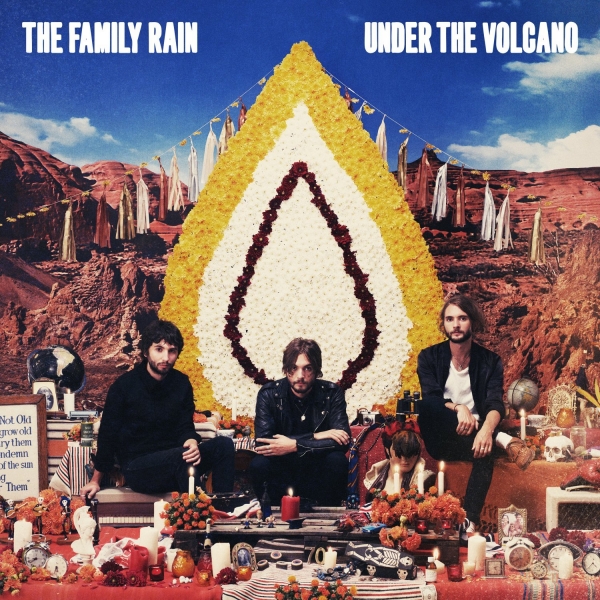 As a band of brothers, should The Family Rain’s family be worried? The clichéd three-course meal that’s usually complimentary for bands heading for the big time has fueled feuds between the Gallaghers, The Followhills and even The Darkness’ Justin and Dan Hawkins. Will Bath’s Will, Ollie and Tom Walter suffer the same fate? Will they even reach the big time? With an album made of punchy, bite-sized crowd pleasers like this it’s possible. While a previous project (Rock Pirates, formed 10 years ago) saw them influenced by the aforementioned Darkness, Under The Volcano clearly still values rock with a decent helping of glam, but has more in common with Kasabian and Miles Kane. (Lucky, then, that they were picked to warm up Kane’s crowd on his recent tour.)

Anyone who’s followed their career since 2012’s debut single “Trust Me… I’m A Genius” (and the further EP and three singles that followed) will already be aware of half of the ten tracks on the standard edition. They’ll also be aware that the dramatic blend of vocals and drums, stalwart guitar and the familiar fuzz of the bass aren’t going anywhere; but that at the same time don’t outstay their welcome. With “Trust Me…” and “Reason To Die” both below the two-minute mark – and the other singles barely past three – these are clearly nuggets aimed at holding an audience’s attention between sing-a-long choruses and applause. Tracks that were designed to be played live, to fill venues and to be chanted as the fans leave. Not that there’s anything wrong with that, if it doesn’t resort to conventional techniques.

More recent single “Feel Better (Frank)” starts life as a cruising gothic drum and bassline, but is soon interrupted with a played-safe chorus (“It’s supposed to make me feel better; it’s supposed to make me feel fine”), while “Don’t Waste Your Time On Me” follows a similar stencil, this time starting slower and building up to the chorus, which is almost the name of the song repeated. It’s a formula that’s already given them a good reputation as a live act, but those sorts of songs never sound the same when they’re played through home stereos to accompany repeated routines. The danger for acts that fall into this category is that fans soon cotton on to how obvious the tracks are, and fall for the next obvious Fratellis or Jet, who filter through to the Dads and their drive-times before taking the next exit to obscurity.

There are moments that show promise of The Family Rain’s forecast looking brighter, however, and managing to do a Kasabian: a band whose setlists are crammed full of anthems and whose studio versions work, too. “Reason To Die” – not unlike a Serge number with the scream-like “ahs” of the backing vocals – also channels The Black Keys with lo-fi production, hip-hop beats and guitar that distorts deliciously throughout. Opener “Carnival” and “Trust Me…” highlight the playfulness of Will’s vocals; with the rawness of Jack White, the occasional yelps of Hives’ Pelle and, elsewhere, a mesmerising strain in the same vein as James Dean Bradfield. With chunks of bluesy piano thrown into the mix, “Trust Me…” becomes one of the more successful moments, with no chorus in sight, but one hell of a beat that an audience could connect with just as much.

“Binocular” – a quirky number that verges on stalking – mixes cheeky bravado (“I’m living by the binocular, not convinced he’ll do it for you”) with something more meaningful (“Emotion is just a chemical field”) and some genius wordplay (“I’m always on watch but never on time”), highlighting the songwriting talents on offer from the brothers. So what about that big time? Under The Volcano is certainly an eruption that puts the band on the map. Now they need to keep it – without resorting to predictable, tried-and-tested measures.