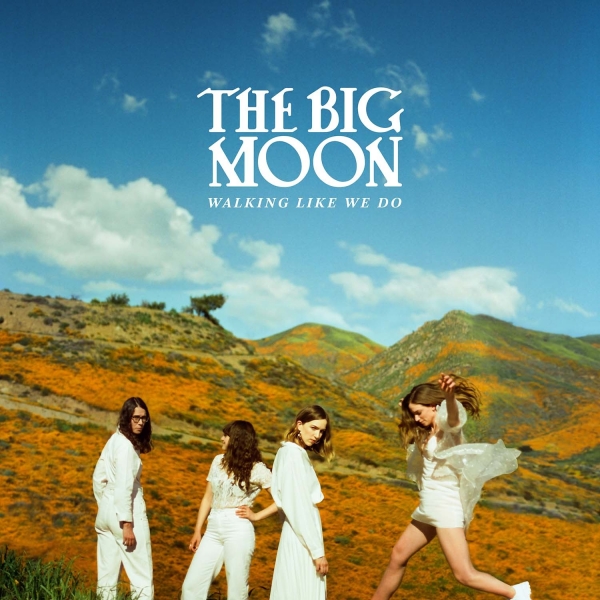 The Big Moon are a band that are very easy to love, as long as you’re a not a jaded, cynical old fart who enjoys listening to music that’s deliberately ‘challenging’ because you’ve lost all joy from your life.

The Big Moon (Jules, Soph, Fern and Celia to their mates) make simple, unchallenging, light-hearted indie-rock that asks about as much of their listeners as the Metro does of its readers. It’s the kind of music you might hear on Made in Chelsea, or FIFA, or Soccer A.M. It’s that universal kind of ‘rock’ music that appeals to the kind of people that think they’re above listening to the charts, and have constructed an entire dreamworld out of their unquenchable urge to move to London and collect vinyl. Outsiders, but only just. And thank God for these (young) people – the people holding on to hopes and dreams and ideals and the idea of true love. Because the world is better for them.

Walking Like We Do is 11 tracks long, and runs to just under 40 minutes. It does everything it needs to, then much like its target audience, gets the hell out of there like it’s about to miss the last Tube. There’s not a single ounce of fat here, and not a hint of post-ironic nonsense. It is what it is, and what it is is simple, enjoyable indie rock.

“It’s Easy Then” is spacious, widescreen and anthemic. “Your Light” sounds very much like Warpaint, if they’d never heard of The Cure, or Catfish & the Bottlemen if they knew how to write things other than hooks.

“Dog Eat Dog” is the necessary piano-led, introspective number, complete with choral vocals and layers of dense, artificial reverb. “Why” is a highlight, with thunderous drums and fashionably squalling guitar breaks. “Don’t Think” is an absolute tune of the highest order, a dark indie disco banger that wouldn’t feel out of place in Killing Eve.

After another ballad (“Waves”), there’s the stately, huge-sounding “Holy Roller”, which sounds like Elastica doing “While My Guitar Gently Weeps”. “Take a Piece” is refreshingly simple, Wolf Alice-esque grunge-pop.

The Big Moon are a perfect example of how to do pop music right. They make music that rewards more than one listen, but doesn’t expect it. This is pure, unadulterated fun, and nothing more. Taken on its own merits, Walking Like We Do is an unmitigated success, and a timely reminder of the simplicity of youth.