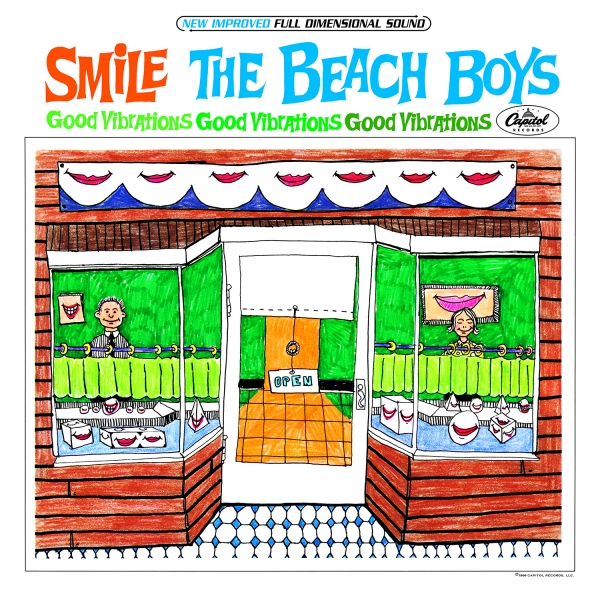 The wait is over. After almost forty years, one of the most infamous discarded albums of all time has finally been properly released. The original recording of SMiLE was abandoned sometime in 1967 due to Brian Wilson’s increasing drug use, paranoia and depression and, since then, it has become one of the most sought-after unreleased albums ever. And now it’s officially out, in deluxe box set form, complete with ridiculous amounts of additional material, bonus tracks, out-takes, demos and… well, you get the idea.

The first disc of the five-disc box set is the album itself. Twenty-seven tracks long (including bonus tracks), it goes without saying that it is, in a nutshell, a masterpiece. But although there’s a real sense of playfulness on the record, there are also more than a few dark undertones here. Wilson’s increasingly unstable mental state and the gradual break up of several relationships within the band are reflected within the album’s tone, albeit hidden just below the surface. In fact, given the circumstances in which SMiLE was recorded, the carefree naivety of the album is in fact somewhat sinister, almost Brechtian.

But there’s no denying the beauty of tracks such as ‘Heroes and Villains’, one of the album’s centre pieces, and hearing ‘Good Vibrations’ in its original context is as thrilling an experience as hearing it for the first time ever. And it’s impossible not to find yourself grinning like an buffoon at the “Boing, boing, boing” backing vocals of ‘Cabin Essence’.

But the real selling point of The SMiLE Sessions is the plethora of bonus tracks and unreleased demos. Demo versions of the likes of ‘Vega-Tables’ and ‘Surf’s Up’ not only give a unique insight into the writing and recording process of the album, but also prove that, even with the stunning production stripped away, Wilson and Van Dyke Parks’ songwriting is more than strong enough to stand up on its own two feet. In fact, the solo version of ‘Surf’s Up’, featuring just Wilson and a chorused electric piano, is one of the highlights of the album. Although it was recorded in ‘67, it could well have been released any time in the last forty years without sounding an inch out of place. It’s a genuinely gorgeous re-working of the track, and it serves as a perfect reminder of Parks and Wilson’s chordal and melodic brilliance – not that anyone needed reminding, of course.

On a more light-hearted note, the eight-minute-long a cappella backing vocal montage is a work of genius in itself. Although it’s hardly a secret that The Beach Boys had some pretty mean harmonies up their sleeves, this montage demonstrates just how creative and imaginative they really were. ‘Brian Falls Into A Piano’, on the other hand, will probably never be regarded as a work of artistic genius, but Beach Boys fans will no doubt love its novelty value anyway.

Meanwhile, the band’s natural rapport and working relationship with one another is clearly demonstrated in the out-takes of ‘Our Prayer’, as they discuss and perfect their complex vocal harmonies. And the attention to detail really is astounding. Although pretty much every discarded take sounds almost perfect, it’s obvious that almost perfect just isn’t good enough for The Beach Boys. Some other tracks are closer to surreal madness than perfection. The ‘Psycodelic Sounds’ tracks, including the aforementioned ‘Brian Falls Into A Piano’, ‘Brian Falls Into A Microphone’, ‘Underwater Chants’ and ‘Moaning Laughing’ are all bizarre, fairly pointless two-minute episodes, but they all add to the album’s overall character in their own unique way.

The SMiLE Sessions is undoubtedly a work of genius. OK, so perhaps four additional discs of bonus material is a tad too much, but there are some real gems hidden amongst them. The album alone would have been enough to justify it’s late release, but the bonus features really do seal the deal. It may have taken almost forty years to be properly released, but the ‘Holy Grail’ of unreleased albums certainly doesn’t disappoint.