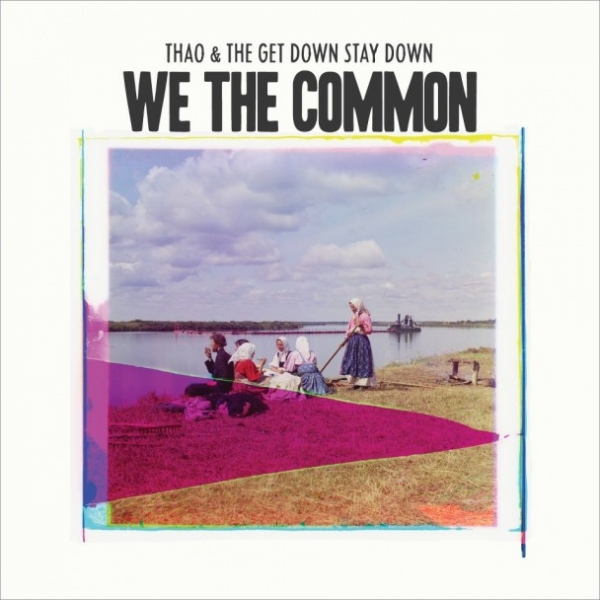 There are so many promising signs surrounding Thao and The Get Down Stay Down’s fourth full-length even before you actually have a listen to the record in full. It’s produced by John Congleton (St. Vincent, The Walkmen), it features a duet with Joanna Newsom, and the first song released to promote it, ‘Holy Rollers’, was a fine folk-rock stomper. So it’s something of a relief to tell you that We The Common just about lives up to that promise.

Through albums Wee Brave Bee Stings and Know Better Learn Faster, Thao Nguyen and her band have crafted brightly bouncing music that’s avoided the tweeness that often surrounds acts that make folk-tinged music and dip a toe or two into the spirit of the 1960s. The trick is the playfulness of Nguyen’s approach; her detached, witty and welcoming voice and lyrics are a treat to listen to, and on 2009′s Know Better… they were matched by a more mature (wait! in a good way) sonic palette. Since then, it’s Nguyen’s work away from music that seems to have influenced the sound and themes of We The Common; she’s volunteered with the Californian Coalition for Women Prisoners, and worked with the non-profit organisation Air Traffic Control, which provides support to musicians with an interest in change and social justice. The record isn’t overtly political, but more about making a change in your own life – being part of the community, being a better person, being a better sibling, daughter, whomever. This is typified by the content of title track ‘We the Common (for Valerie Bolden)‘. Written after a meeting Nguyen had with a female prisoner, it takes the ideals of justice and truth, and marries them to simple human feelings. Over scratchy guitar and banjo, and deliriously off-kilter backing “woo hoo”s, Nguyen relates Bolden’s experiences to the listener: “I love my girl, will you remind her/That, oh, how we the common do cry” and goes on to debate whether or not the system has failed this particular woman. It’s powerful stuff, but married to sprightly music so as not to weigh us down.

The muscular guitar workout of ‘City’ keeps the mood upbeat while pleading to her adopted home town to “start a new year whenever you need” and make a change now, rather than waiting for what you think might be the right moment. This feeds into the languid jazzy swing of ‘We Don’t Call’ where the theme of making a change is applied to a relationship, with Nguyen singing, deadpan: “Bye bye baby I’m going to work/Chase myself all over the earth/Do we wait too long/Do you wait too much?” The aforementioned single ‘Holy Rollers’ shines on sparkling banjo work before we reach the album’s central point, positionally at the very least if not musically. ‘Kindness Be Conceived’ is a wonderful duet with Joanna Newsom, harking back to the harpist’s work on The Milk-Eyed Mender. It’s a gleeful country hoe-down, and in terms of harmonies Nguyen and Newsom’s voices seem perfectly pitted against each other. Nguyen has already collaborated with one quirky west coast musician through her work with Mirah, so what chance an album full of tracks as lovely as ‘Kindness Be Conceived’ with Newsom?

Things drift a touch post-Newsom, but the rattle and hum of ‘Move’, with a wonderfully chaotic brass section, brings it back in style, and Nguyen is on fire as she yelps and shouts her way to the outtro. ‘Human Heart’ is similarly uplifting, with an old R&B riff adding power to lyrics once more concerned with change and Nguyen urging herself to “get devoted” before the final singalong of ‘Age of Ice’ brings matters to a rousing close.

It’s tricky to get “big” themes right in music without sounding like you’re preaching or, worse, being completely glib so it’s to Nguyen’s credit that the ideas of creating a better community and being thankful for what you’ve got and how you got it aren’t handled clumsily. It’s the witty and indirect way Thao and her band approaches the subjects in these songs that makes We The Common a minor delight. So like she urges herself in ‘Human Heart’, it’s maybe time to get devoted to this lot.