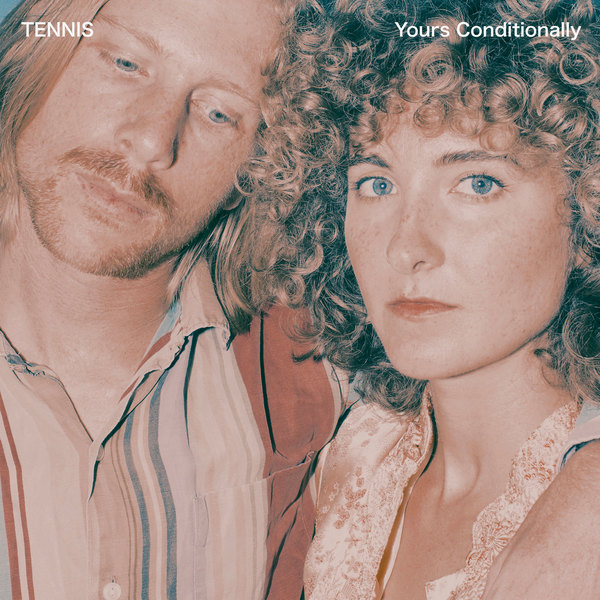 It’s easier to picture Tennis existing in the 1970s, playing up their husband-and-wife shtick and performing their piano-laden love songs in matching Technicolor outfits on variety shows, sharing the stage with a bevy of beehive-haired backup vocalists.

But the beauty of Tennis is that they exist in a far more cynical age, one in which their sweet, summery tunes serve as an artifice that allows singer Alaina Moore to subvert conventional romantic notions and use her sugary falsetto to lull you into a false sense of security that she erodes more and more with each line. The title of their latest LP, Yours Conditionally, alludes to this well-executed ploy, and the album itself is both sonically syrupy and thematically coy.

“I’m just a vehicle and I won’t be back again”, Moore sings on the biting “My Emotions are Blinding”, a sendup of the one-dimensional, lovesick female character that vocalists are often forced to play in pop music. The instrumental is pure, addictive dream pop – it sounds like early Wild Nothing – while the message cuts deep and rings true.

“Ladies Don’t Play Guitar” is another stunner that leaves stereotypes in crumbled rubble. “Baby I’ve been listening / I can be the archetype of whatever you’re feeling”, Moore sings, giving way to an irresistibly fuzzy lick. Elsewhere, “Please Don’t Ruin This For Me” and “Modern Woman” are both charmingly soft, packing not only a deceptive bite but also some of Moore’s strongest vocal work in the band’s entire discography.

Throughout Yours Conditionally, the interplay between Moore’s chords and Patrick Riley’s thick, knotty bass lines is always wonderful, a true sign of their musical chemistry. It’s particularly evident on “In the Morning I’ll Be Better” where Moore’s bluesy stabs are balanced out by Riley’s downbeat blasts.

I suppose that there’s a less cynical way to interpret Tennis’ fourth album, and if all you want are placid love songs you can keep your reading to the most surface level. But, Yours Conditionally is much more fun when you allow yourself to dive headfirst into its strife and inhale its sarcasm rather than floating along its serene surface.

Although that’s perfectly nice, too.