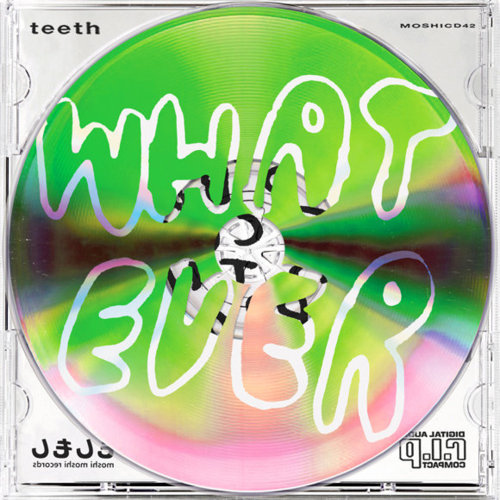 Be warned. The half-hour brainstorm that is Teeth’s first full-length record is about as far from an easy listening experience as you’re likely to find all year. Consider this a disclaimer.

The snarlingly-entitled Whatever, with its equally obnoxious cover sleeve, opens with a few playfully uncertain sounding Atari-esque bleeps and scratchy noises before a barrage of shouty screeching vocals and high velocity cymbal smashing is unleashed. And this is pretty much what fills the following 30-minute freak-out.

Beware any band that juxtaposes songs titled ‘Care Bears’ and ‘Dead Boys’. The coupling of these two electro-thrashing bang-a-langas is enough to give your ears the aural equivalent of heartburn. The high-BPM bouncing version of a Space Invader soundtrack is probably perfectly suited to a darkened nightclub with glow-in-the-dark graffiti on the walls. But listening to it through earphones on a rush hour train is like buying a one-way ticket to a town called panic. That said, by the time track five drops, Teeth have calmed down ever-so-slightly to produce the sort of pumping raver rage found on early Rapture records. But make no mistake, if played too loud ‘Time Changes’ still has the shockability to induce Tinnitus (whether real or imagined).

Things get a little more light-hearted with ‘This Time’, a schoolyard chant that sounds like a less wholesome version of a Matt and Kim track being played over a hyperactive drum machine. With a sonic boom worth of reverb replacing the clean cut-edge, Teeth throw in some klaxon hoots and, yes, you guessed it, some more hyperactive scratching and cymbal bashing. Repetition seems to be a theme with Teeth lyrics too and reaches its climax on ‘Pill Program’, a popping-n-hopping, frothy-mouthed, shouty punchbag of a poem about contraception. Possibly. As with the rest of the record, the content of the lyrics play second fiddle to an all-encompassing breakneck-paced noise fest.

Those brave enough to have made it past the half way point of Whatever will be rewarded with the wonderful ‘See Spaces’, a toned down affair that sounds like Saint Etienne being sampled by Sleigh Bells via a noise peddle or two. It’s nice, epic and possibly an indication of what Teeth could come up with if they swapped their high-energy protein shakes for a chilled out beer every once in a while.

So, while Teeth’s debut LP as a whole may be a bit too off-its-tits for its own good (and at times, ours), there are moments among the incessant hyperactivity where the band’s unbridled energy is a genuinely exciting prospect.