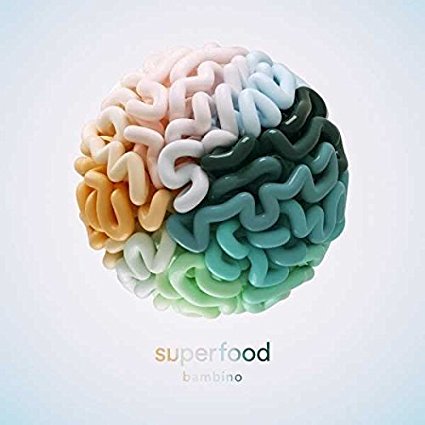 Superfood found themselves awkwardly tangled-up with the wave of pink-haired, dungaree-wearing bands from Birmingham who arrived and eventually fizzled-out in recent years.

Perhaps being compared to bands like Peace, Swim Deep and JAWS wasn’t a bad thing in terms of exposure, though it certainly felt like they were unfairly lumped into a scene which robbed them of their own identity. Their second album Bambino now acts as a vital chance to prove that they can stand out from the crowd on their own terms.

Bouncing back can be easier said than done when you’re stuck in a creative limbo. Vocalist Dom Ganderton has been open about the struggles the band had in the run-up to this record; the usual no money, no label situation. That’s why it’s a credit to them that they’ve persevered and returned with with a renewed energy. The fuzzy guitars have very much been subbed-out for a clear-cut sound that’s packed with rich and exotic samples.

It’s definitely an album that’s giddy with ideas, but this only works to its advantage. Singles like “I Can’t See” and “Unstoppable” sound more confident than this band have ever been before. They’re even happy to push the boat out with a track like “Need a Little Spider”, a colourful jam that could weirdly be mistaken for early Wolfmother. It’s a record which blossoms with this kind of randomness but it rarely looses soul and groove. Forget the Superfood of old, because this record is different for all the right reasons.