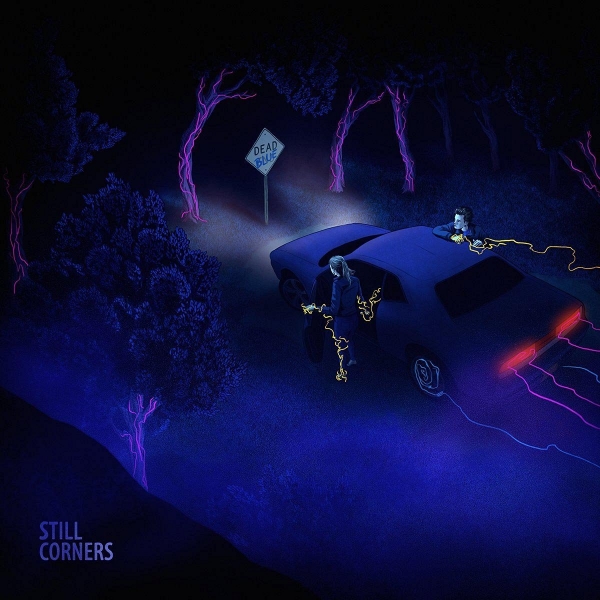 When Still Corners first emerged with their excellent debut on Sub Pop, 2011’s Creatures of An Hour, the duo appeared in a 1960’s influenced haze; oblique, psychedelic and darkly intimate, a London re-imagination of Beach House, a modern day Broadcast, a musical interpretation of film noir.

The follow up, 2013’s Strange Pleasures, had them replace the monochrome murk with glorious technicolour, Tessa Murray’s vocals remaining a non-committal sigh but given the space to breathe alongside the music of Greg Hughes, be it the heartbreak disco beats, the stolen Johnny Marr riffs, the cinematic soundscapes, it was an album which was enthralled with pop music, but the kind that makes you cry.

So with such a notable shift in sound, a change of label (this release comes via their own Wrecking Light imprint) and a new base, swapping the claustrophobia of Greenwich for the sea side of Deal in Kent, further reinvention wouldn’t be a surprise, but instead they’ve consolidated on the progression made between their first two albums and in turn produced their finest effort to date.

As they did on Strange Pleasures with the spectacular "The Trip", this album begins with the very best track, "Lost Boys". The lyrical influence of which came after Murray finished reading Catch a Wave, the warts and all book about The Beach Boys’ Brian Wilson, the original lost boy. The lyrics have Murray remembering previous relationships with lost souls: “There are boys in the twilight zone, alone / I see them drift away / there’s good and evil, in their eyes” she swoons over delicious muted electronic beats, muffled like an old tape from 1985. Shimmering synth work, a smoky guitar riff, Moroder-esque arpeggios, and a hook which comes directly from the Bronski Beat classic "Smalltown Boy" complete the aural treat.

The jewel though is "Bad Country". Pre-release copies of this album began circulating on the day the UK decided to Brexit from the rest of the EU, this song came along at the right time, as it encapsulates the feeling of those who were against such a move: “It's not alright, it's just scary /  but here we are, we're in a bad country”. Acoustic guitars and urgent bass drive the track to its delicious conclusion; despite sounding like Mazzy Star on ecstasy, Murray’s coos - however sweet - can't fix that.

The wordless vocal harmonising and mournful arpeggios of "Skimming" may only be 60 seconds long, but it's important as it's an explicit split between the two halves of the album, there's no mid or latter part album drag here, at this point Dead Blue gets even better. "Down With Heaven and Hell" is a prime example of the stuff they used to call chillwave. Sun-baked beats, analogue synths, Eno influenced atmospherics, cut up vocals and a guitar line with the vagueness of shoegaze, sure it's totally what Chromatics do, but it's also a trick Still Corners have mastered. "Downtown" which also uses processed 80s drum beats and synthesized bass to drive lyrics about looking for a distant, maybe yet unfounded lover, gorgeous surf guitars and synth fizz, show an act operating at the very top of their game.

Acoustic anger, slashing surf guitar and a David Gilmour riff going through a lurid bad trip on the surprisingly snarling “The Fixer” shakes up the sedate calm that comes before it, while the jittery new wave pop of "Dreamhorse" sounds like a thousand synths played on a Human League track, the synth pop continues effectively on "Nightwalk" which begins with a cold desolate three minutes of build evoking the uncertainty of being alone late at night in dark places before it rips into a lost track from touch era Eurythmics, these are great things.

OK, so reality checks will point out that there are literally thousands of acts making this kind of music, from M83 to Tamaryn, Keep Shelley in Athens to Neon Indian. It's nothing new, no. But Still Corners just do it better than the rest.