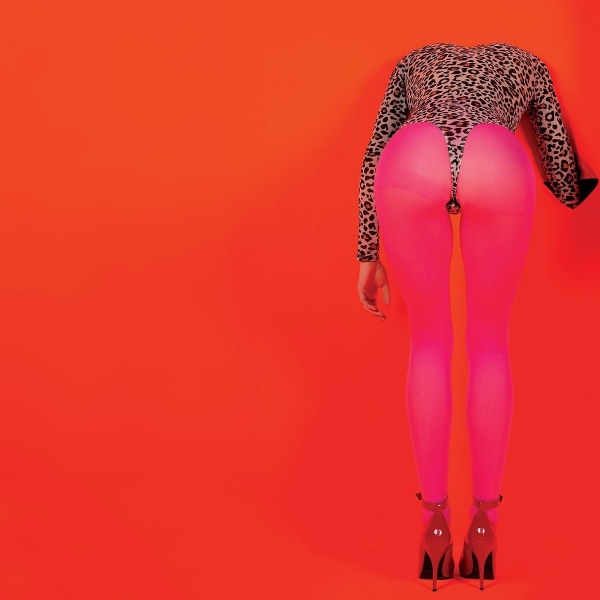 “The void is back and unblinking,” sings Annie Clark, tentatively opening MASSEDUCTION with something like a half-whispered 3am answer phone message; a confession to a blissfully unaware, sleeping lover.

This opening track – the apologetic, desperate prologue “Hang on Me” – presents Clark as the restless consumer on a come down, a prologue to the excesses of thought and activity and sex and substance that populate the record. Her voice is uncharacteristically cracked but still hopeful, begging for someone to cling to while everything crashes around her (again): “I know you hate my hysterics / I promise this time it’s different… Just please don’t hang up yet.”

Those scanning MASSEDUCTION for the truth might think they’ve found it here – a glimpse of the ‘real’ Clark behind her St. Vincent moniker – and it certainly fits the established aftermath-of-fame story of the record. But Annie Clark knows that ‘authenticity’ is just another hokey set of semantics, and that fantasy – and especially the particular fantasy of pop music – can tell us as much about our innermost selves as documentary reality.

Her fifth record, MASSEDUCTION is maximalist by definition: Lyrically, aesthetically – the all-caps, the clashing red and pink and leopard of its cover art – and musically; with Clark’s virtuosic guitar playing crashing into layer upon layer of synths and programmed beats. Every song contains sounds or ideas for ten others, as though the record might suddenly burst and multiply like spiders running from a nest. There is a complete sense of Clark at the centre of a gluttonous mass: and she knows from experience that loneliness lives at the core of excess.

MASSEDUCTION has most in common with art that understands that desire and violence have the same roots. Accelerated dystopias where every desire is driven to its natural conclusion: Alexander McQueen’s 2009 fashion show The Horn of Plenty, populated by models in nightmare recreations of ladies-who-lunch tweed suits with their faces rubbed in hundred-dollar lipstick, or Margaret Atwood’s The Year of the Flood, where the catsuits of erotic dancers transform their wearers into scaled hypersexual creatures. The single “Los Ageless” is a near-future fable of eternal youth, its accompanying video a pastel-coloured plastic surgery nightmare. Nestled between the depictions of cage-dancing girls and endless artificial summer is the repeated refrain, “How could anybody have you and lose you and not lose their minds too?”, an explanation or an excuse: People don’t just destroy themselves – or let others destroy them – for nothing, you know. As the song fades out, her usually assured voice laments, “I tried to write you a love song,” a kind of epilogue or correction. Closing track “Smoking Section” is a devastating death-wish, with Clark waltzing with her own self-hatred, daring herself to jump, to “let it happen/let it happen/let it happen.” In the parallel world that she has created for herself, and in whatever ‘real life’ is, excess is an incubator for regret.

Gender and sexuality are presented as experimental, unfixed: On “Sugarboy”, Clark proclaims, “BOYS! I am a lot like you / GIRLS! I am a lot like you,” an update of Prince’s promise that “I’m not a woman / I’m not a man / I am something that you’ll never comprehend.” The title track’s refrain of “I can’t turn off what turns me on,” is Clark embracing the unhinged elements of her sexuality, a refreshing antithesis of the usual boring tropes of the ‘sexually liberated woman’ as one who has shed all the urges of adolescence, and whose control (whatever that means) stems from her acting like a man. Instead, Clark prizes adolescent urges as part of her spectrum of sexual experience, wrestling back uninhibited, self-serving female pleasure.

Some listeners will give in to the irresistible urge to match up MASSEDUCTION with St. Vincent’s ‘real’ life – her relationship with Cara Delevigne, of course, and her resulting temporary tabloid fame – and who can blame them? But these concerns feel ephemeral in the face of a work so huge and complete, which speaks to an essential truth: That there is always loneliness, and the physical, unspeakable desire to create to express it or cancel it out.

MASSEDUCTION poses so many questions about authenticity and the real and the fake, but Clark is laughing at us while we’re thinking them over – as though there are only two binary sides of authenticity, as though we are only ever one person. In one of the hyper-stylised interview videos posted to her Instagram in the run up to the album’s release, she is asked whether St. Vincent and Annie Clark are the same person. “You’d have to ask her,” she replies. Ultimately, MASSEDUCTION defies explanation and critique, rendering the critic a dead weight in the dust of its ever-accelerating sucker-punch of ideas.