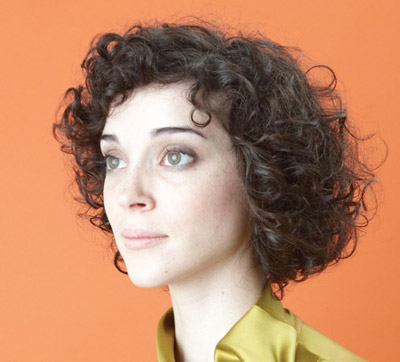 “Alas! When passion is both meek and wild!” John Keats once wrote. It’s the epigraph that Richard Yates, that great chronicler of the darker side of the American suburban dream, used to introduce Revolutionary Road, and it’s no less befitting an overture for St. Vincent’s second record, Actor.

For all Annie Clark’s doe-eyed physical delicacy and gentle vocals, there’s a fiercely shredded guitar riff and distorted beat that heads straight to the jugular, uprooting the white picket fences of the domesticity where she lays her less than rosy scene. Conceived by watching films such as The Wizard of Oz and Disney’s Sleeping Beauty on mute and reimagining their soundtracks, the follow up to 2007′s Marry Me eloquently negotiates the narrative arc of a relationship in freefall to the tune of a glorious orchestra redolent of Paul J. Smith’s work on Snow White and the Seven Dwarves.

But despite all of Annie’s humbleness, and self-dismissing as “a wife in watercolours” easily washed away on ‘Save Me From What I Want’, this is a record in full Technicolor that demands your attention; it’s impossible to work to, to ignore it when you’re in the room together, and blasphemously futile to try and use as background ambience, taking you back to what seem like ancient times where a whole afternoon could be passed just laying on your bed, wallowing in a record. Every second of music and quirk of vocal tone implies a nuance that goes beyond what’s being said, whether the acute kindly reprimand of a former lover, again on ‘Save Me…’, whose fuzzy percussion skips like Dick Van Dyke as she sings, “Honey what reveals you / Is what you try to hide away”, or during ‘The Party’, soul destroying with its soaring “oohing” chorus, where she exposes the rigmarole at the heart of social engagement that April and Frank Wheeler no doubt knew well – “Oh that’s the trouble / With ticking and talking”.

Whilst the lyrics to Actor remain often sombre, its chamber pop sensibilities mixed with King Crimson style guitar gravel bring it firmly into the realms of euphoria. ‘Laughing With a Mouth of Blood” is mindblowingly sexy (though it feels crass to call it so), as what sounds like whale magic chimes into the lines “Just like an amnesiac / Trying to get my senses back” melting from her lips over a grimy drum beat, before singing, “Laughing with a mouth of blood / From a little spill I took”. When was the last time you heard someone take a “spill” in a pop song?! The charm offensive continues with single ‘Actor Out of Work’, where she takes control, belittling whoever’s wronged her with saccharine vehemence, a contrapuntal mix of her sweet aria and stinging guitars that act as the choric illumination for ‘Marrow’ – if when December comes there’s been a better riff, I’ll eat my proverbial hat, shorts and ears. In fact, I can hardly bring my fingers to the keyboard to write about just how good it is – they’re too busy dancing to this ecstatic mix of load, shoot and fire dirtiness, all razor sharp filthy guitar and melodica exuberance atop oscillating shimmer. Kanye West is going to be all over it.

It really wouldn’t be hard to wax lyrical for a dissertation’s length about the sheer brilliance of this album. There’s not a dull note or word out of place, and the only annoying thing about it is how consistently perfect Annie Clark manages to be (she’s far too sweet to tread on even the tiniest nerve), but to detail them all would deprive you of the pleasures of discovering them yourself. She’s not nearly hubristic enough for this lyric to be intentionally self-referential, but when on ‘Save Me From What I Want’ she sings, “the future’s got big plans for me”, you can only hope that’s an understatement. Flawless.