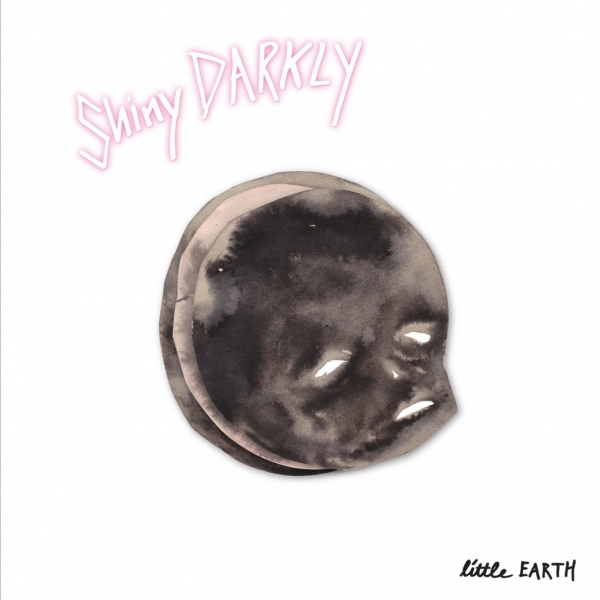 Shiny Darkly are three gloomy souls from Copenhagen - vocalist and guitarist Kristoffer Bech, drummer Mads Lassen and bassist Oliver Matthew Volz - who bonded over a mutual love for 60’s garage bands, angular British post-punk and velvet-fingered goths. Their 2012 debut self-titled EP, although brilliant, played out like a pick-and-mix bag of any band to ever don black or kohl pencil.

The lumbering stomps of “Diana” combined the psych groove of The Doors and the vibe of Joy Divisions’ “Wilderness”. “He’s Suicidal” sounded like an amalgamation of The Damned and The Horrors. Any given track prickled with shades of 13th Floor Elevators, the bug-eyed dread of The Cure circa Pornography, The Jesus and Mary Chain's visceral intensity. Derivative? Sure, but only of excellent bands.

Three years later the band’s debut full-length Little Earth arrives after a heavy delay. Originally slated for release in early 2014, following the 2012 EP and a further three-track taster in 2013, it seems to have been in the pipeline forever. Time hasn’t dulled Shiny Darkly’s magpie tendencies however - these tracks are plastered with a sense of what’s come before.

The soaring atmospherics of “Animal Fate” are a dead ringer for The Cure’s “Prayers For Rain”, with Bech delivering some vocals that sound uncannily like Faris Badwan. “Eternal Chase”’s slick, gloomy jangles recall Sisters of Mercy. “Ignorance” combines all of the above together with droning guitar and druggy basslines reminiscent of The Black Angels. Yet while in weaving it they’ve become masters of creating atmosphere.

Consistently Little Earth manages to sound romantic, demonic and frenzied all at once. Their debut EP impressed with its sheer claustrophobia. Here, they take this sense of dread and make it cinematic. “Soft Skin” builds with vintage organ keys and a driving, tense groove, Bech’s vocals inaudible and bordering on desperate. “Sacred Floor”, another single, sees the band wringing seductive, reverb-drenched tones from their guitars, swirling towards a noise-pop close. “This Frail Creature” is an absolute highlight, glowing with dreamy gothic flair and theatrics in the vein of Gene Loves Jezebel and the Fields of the Nephilim. Every track drips with a hypnotic urgency, no more so on nine minute closer “Dead Stars”, which begins with a serrated bassline and eventually dissolves in a frazzle of screaming feedback.

There’s barely anything left at this point to milk from the ragged corpse of brooding, sinister goth-rock and Shiny Darkly are well aware of this. Their authenticity has been buried beneath a blur of imitation but nevertheless, this is a strong contribution to a genre that simply refuses to die.