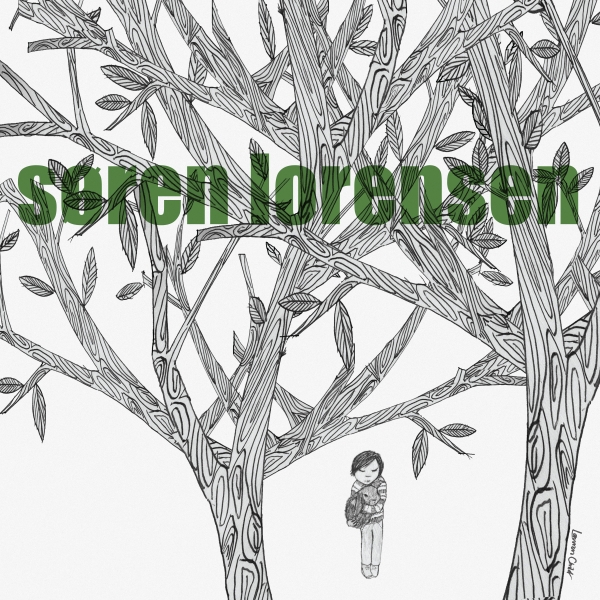 In the background of Lauren Child’s Charlie and Lola series about the two eponymous siblings is Søren Lorensen, an imaginary friend whose form and detail fluctuated with his creator’s attention. Mostly, he was a grey and translucent sketch.

Søren Lorensen is now the imaginary friend of Matt Hales (Aqualung) and violinist Davide Rossi (Goldfrapp, Coldplay, Röyksopp), adopted by them after Hales’ kids had been watching the TV show. He’s standing in a forest with a rabbit in his arms on the illustrated cover art by Childs for their debut album, Lake Constance, an opulent ten-track that plays like a deconstructed soundtrack. Ambient electronics roll into a rich chamber-pop falsetto and curl back into whatever contemporary classical world they first embarked from.

Where the electronics become less focused, it sounds at times like listening to Andrew Bird having a long bath with one of those plastic galaxy lights splaying across the ceiling, bouncing off the bubbles. The lush violin is occasionally too lush, and the pair’s dexterity can turn into over-indulgence. But its highlights are sure-footed surprises. First track "Furrows" opens with brightly skipping strings, loop pedals and layering effects that dart off the surface of Lake Constance with a symphonic, hyper-multitracked sound, whilst the vocals sound profoundly empathetic.

"Escape Goat" is a particular highlight (“it should have been Scapegoat, but Davide’s Italian and he makes mistakes with the English language all the time”). It plays more like the brilliantly visceral mid-tempo thralls of Laraaji’s Sun Transformations than its synthetic percussion should allow, with soft static gathering around a mournful vocal like dust on an old carpet. The heady, classical-pop hybrid of "Swallow" and "Growing Up Grey in a Black and White World" are particularly solipsistic. The routes travelled have taken in Fripp and Eno influences, sure, but this feels fundamentally more like their adventurous pop equivalent.