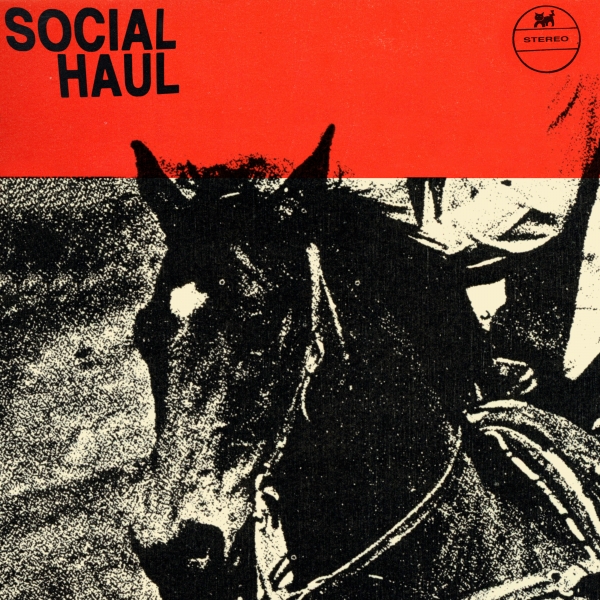 As his day job with indie stalwarts TRAAMS came to a halt last year, guitarist Leigh Padley found himself struggling to adapt to a life without music at its centre. Deciding a new project was a necessity, he contacted a couple of pals to get things moving. And so, Social Haul came into being.

Calling upon childhood friend Daniel Daws (bass), and Richard Trust (drums), who he’d met through his involvement in local music, Padley’s newly-formed trio have as their North Star scuzzy indie acts in the vein of Sleater-Kinney, Interpol and, yes, occasionally TRAAMS.

A delightfully contained debut record (the self-titled album runs to a total of less than 25 minutes), Padley’s riddled writing demonstrates a skill for prose veiled during his previous tenure. Describing in a press release how the album “loosely depicts a protagonist challenging perceived negative aspects of character”, his lyrics are as often visceral (“Window to the soul / Two buried holes in your head” from “Wet Eyes”) as they are humorously nihilistic (notably on “Prized From The Rot” - “Though impossible to forewarn, I did not ask to be born”). Commenting on the fault lines running through society, his work is pointed and particular, with even the occasional over-writing and obfuscation doing little to distract from what is generally greatly compelling.

While politics is a theme present throughout much of Social Haul, the rather tame “The Best Dust Up” its most explicit indictment, the record as a whole is not a solely political record. Instead, it’s concerned with the wider gamut of experiences, ruminating on the individual experiences as much as it does the public. Swaggering closer “I Have A Pen” does provide a concise social critque, deriding the arrogance and inaction of those with authority while also paying heed to the loneliness that comes with dislocation. Single “The Ease” adopts a more positive tone, its protagonist oozing with self-belief as they overcome obstacles by reducing them to nothing. Backed by a boozy, barreling performance from Daws and Trust, pulled straight from Thin Lizzy’s back catalogue and bolstered by the camaraderie of simply being in a band with your mates, it’s a hat tip to striding onwards with aplomb, and a recognition of how strident we can be when we put our minds to it.

Padley has said that much of Social Haul was written in pubs, as he scribbled down notes from conversations heard around him. And it tells. Encompassing subjects that matter, both personal and political, and revelling in the energy created when human beings interact with one another, Social Haul is a rollicking delight. With new TRAAMS music on the horizon, it's a shame Padley won't have the opportunity to become so restless again anytime soon.