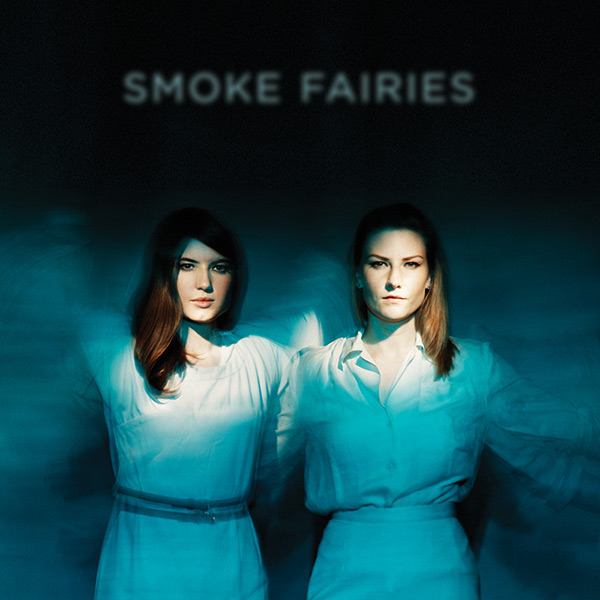 Shorter lifespans make for better bands, so goes the theory: is it better to burn out than to be Coldplay? Even so, when a band bows out at the peak of its powers, it’s often hard to fathom why – and, amid the acclaim for 2012′s excellent Blood Speaks, no-one realised that Smoke Fairies were in danger of dissipating.

Fortunately, Jessica Davies decided her itchy feet had found crossroads, not the end of the road, and the London-based duo’s return is as assured and unfailing as ever.

Album opener “We’ve Seen Birds” gifts an instant lift, taking allegorical flight after a wink at “Sadness is a Blessing” in the opening bars. A celebration of motorway raptor-spotting during touring, Davies’ lyrics deftly combine self-deprecation with wide-eyed appreciation, alluding to the duo’s highs and history as much as to majestic birds of prey. These musings are coupled, and touching: “We’ve seen birds/Golden sunlight catching their wings/We’ve been here since we were kids/Did you think we could exist like this?” If Davies and bandmate Katherine Blamire had seen Smoke Fairies flash before them during that briefest of hiatuses, here is a catchy avowal that this music is a worthy end, “even if it means we’re screwing up the rest of our lives”.

Though their characteristic combination of folky vocals with blues-soaked tunes remains unmistakable, harmonies are harder to come by here. This is a conscious uncoupling – but their solo voices share silvery, soothing tones. Both breathe solemnity and certainty into songs of gleam and gloom.

Second track “Eclipse Them All” returns to the ethereal thicket Smoke Fairies long made home. Tranquil trunks and trembling leaves are softly illuminated, with the occasional twanging shaft of light. As songwriters, the pair share a gift for extrapolating simple ideas into grand and affecting statements, weighty and centred like Eliot’s “still point of the turning world“, with poise, power and no sense of travail.

Mostly, though, Smoke Fairies is an open-air affair compared to previous releases; sited outside, seeing in. “Misty Versions” makes this literal, musing menacingly on a window-breath voyeur – but other songs share the perspective, a sense of the elsewhere. “Shadow Inversions” plugs into a microcosmic storm, “Drinks and Dancing” is awash in retrospection, and “Want It Forever” squirts like a pop song selling its introspection.

With a refocused lens and retreating to record in Kent, the band also embrace experimental zeal. If Blood Speaks found streaks of steel, Smoke Fairies is malleable in music and meaning. “Koto” bends perspective in a glorious ellipse around the “Seaside off-season / No-one around / Reality runs out in the end / I will not… see you again”, full-blooded ambiguity in amorous clamour.

Smoke Fairies are still synonymous with vapours and veils, wind riffling and darkness shrouding. Yet this eponymous album, and the road to its release, represents a rebirth: fairies and their phoenix from the smoke.