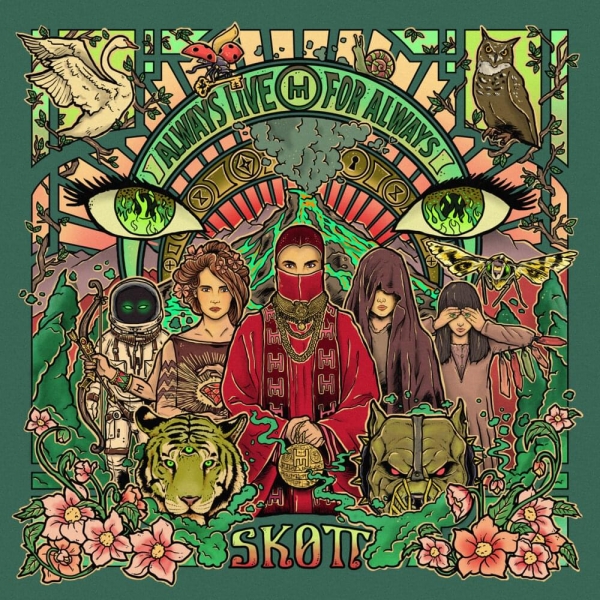 Growing up surrounded by Scandinavian folk music and video games, Skott’s musical output was always going to be something a bit different.

True to those influences, on Always Live For Always it's difficult to pin-point where Skott lies in the pop music landscape, constantly pin-balling between sounds, even on individual songs – it's the sound of an artist creating for herself rather than aiming to please.

From the opening notes you're free-falling into Skott's dream world as mythology is woven through the album, trickling down into various lyrics and soundscapes. From direct references within tracks, to the beautiful illustrated artwork which has accompanied the album roll-out, pressing play means getting swept away with her. The best example of this is found in the album's crown jewel, the otherworldly "Midas". Sitting on the same four chords all the way through, the vocal performance is the star of the show as it transforms from a low hum to orchestral warbles and back again. The mythological references are of course conspicuous in this one as she compares a lover to the infamous Greek King: "you wanna be the one and only / doesn't it get lonely?" However Skott has managed to do what many other mythology-loving artists haven't, and that is match the mood and movement of the music to the ancient tale, doing it justice and giving it new life all in one breath.

Elsewhere on the album Skott leans further into a commercial sound. The burbling pop of "Talk About Me" is as radio ready as a song can get, whilst the ash-smeared "Kodak and Codeine" illuminates a thorny relationship that manages to keep on drawing you back in with its murky synths and clanging drums. In her pursuit of the cinematic this album can border on apocalyptic in some places – on "Amelia" you wonder if Skott is exploring the feelings that come with a relationship or the strains on a relationship when you're in a survival situation: "we even broke in to a warehouse, so no one would find out," but in this her love of video games and their soundtracks really shines.

With her debut album Skott takes another assured step towards mythologising herself and her output, creating a world fans will be glad to get lost in.