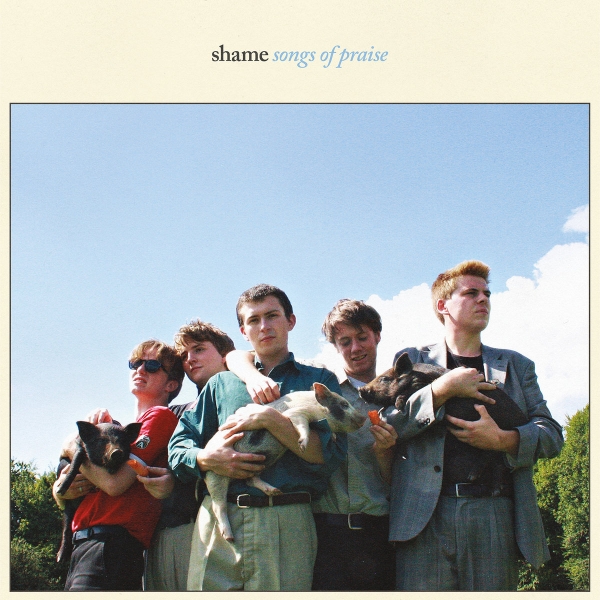 There’s something dangerously exciting about music that feels like careering into the darkness at breakneck speed on a rusty mine cart with faulty breaks.

That’s exactly how it feels to throw yourself into Shame’s phenomenal debut album, Songs of Praise. It’s an intense expedition into the feral corners of the minds of five South London school friends raised on a diet of The Birthday Party and The Fall.

From start to finish, Songs of Praise is tightly wound, ready to explode, and packed with lyrics dripping in a heady cocktail of venom and sarcasm. Frontman Charlie Steen manages to combine the socio-political wit of Jarvis Cocker’s bored suburbia with the seedy preaching of Nick Cave’s dustbowl underworld into a scorching sneer.

On “One Rizla”, the first song the band ever wrote when they were 16, Steen spits: “My voice ain’t the best you’ve heard / And you can choose to hate my words / But do I give a fuck?” But in reality, it’s this voice, with the attitude of an Oi! punk but also the control to stop things veering off into madness, that is the highlight of Songs of Praise.

The way Steen rolls “golden ticket” and “gynecologist” around with delight in the darkly funny “The Lick” is electrifyingly cool, while his throaty roar on opener “Dust on Trial” is fierce and furious.

But Shame aren't solely reliant on Steen. The rest of the band easily keep pace, never failing to deliver on sounds that will make your heart stop. Though clearly diving into the annals of British rock history and taking inspiration from their forefathers to find their sound, Shame have polished the pearls they've uncovered with their own flavour. The stampeding drums and jittering riffs of their punk heroes feel like they now belong to Shame – their's to inspire a new generation with.

Whether it’s the reckless wonder of “Lampoon”, the woozy debauchery of “Gold Hole” or the menacing rumble of “Dust On Trial”, Songs of Praise is a daring and thoroughly intoxicating ride. At times, it even feels so overwhelming to the point you just want to throw yourself into the noise.

With Songs of Praise, Shame have smashed through walls with a bold and unflinching manifesto and raised the bar for young bands wanting to make an impact. It’s the sound of politically engaged youngsters living between the cracks demanding to be heard in a society that’s more than happy to look right past them.

Listening to the raucous anthems that bury into your very soul, it feels as magical as something almost on the verge of collapsing can feel. Whip smart, furious and, most importantly, fun, Songs of Praise is the first essential album of 2018. And what an album it is.